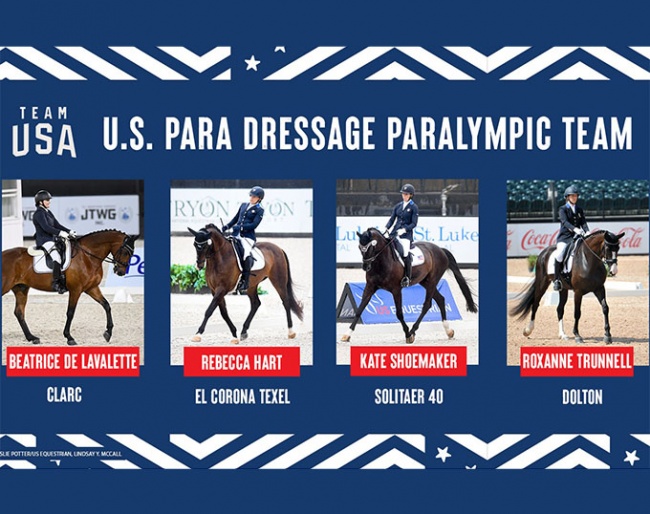 US Equestrian has announced the four athlete-and-horse combinations that have been selected to the U.S. Para Dressage Team for the Paralympic Games Tokyo 2020 alongside one direct reserve and two team alternates.

Chef d’Equipe Michel Assouline and Team Leader Laureen Johnson will lead the team in Tokyo. Paralympic equestrian competition is set to begin on August 28 and continue through August 30, 2021, at the Equestrian Park venue in Tokyo, Japan.

“Selectors had a difficult task to choose four athletes to represent the U.S. at the Paralympic Games Tokyo 2020, as we had a lot of talented athletes all gathering score averages over 70% for the past six months,” said Assouline. “I really believe they have chosen a good squad and I very much look forward to the journey to Tokyo. We will be facing fierce competition as several top European teams have done extremely well recently at international competitions, but we have done too. We have a strong, competitive group, and I look forward to our tactical preparations leading up to Tokyo.”

The following athletes and horses have been selected to the 2020 U.S. Para Dressage Paralympic Team:

The following combinations have been named as team alternates and are listed in selected order:

The three combinations who will represent the U.S. in team competition will be determined after the completion of the Individual Tests on Friday, August 27. All nominations to the U.S. Paralympic Team are subject to approval by the United States Olympic and Paralympic Committee.