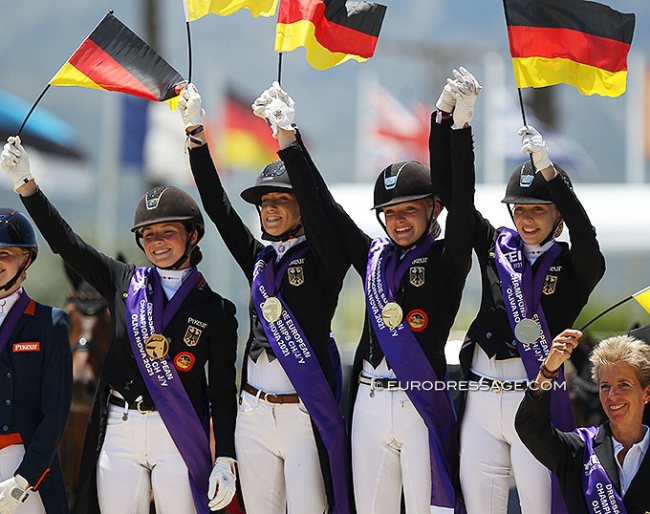 Germany won the team gold medal at the 2021 European Junior Riders Championships in Oliva Nova, Spain on Thursday 8 July 2021 but it was British Annabella Pidgley, who stole the show with the best ride of the day.

The Junior Rider Team Championship test came to a conclusion on Thursday morning with the second group of ridings competing in front of judges Elke Ebert (GER), Olivier Smeets (BEL), Magnus Ringmark(SWE), Hans Voser (SUI) and Alice Schwab (AUT). The class started early at 8 AM and the sun was shining back at full force although the temperatures did not climb over 30 ° C as they did on horse inspection day.

Germany was the overnight leader in the team ranking, but Dutch duo Evi van Rooij and Don Tango B was standing on the highest place on the leaderboard. The cards were reshuffled today as some of the teams' strongest pairs competed this morning. The team ranking produced very little surprises with the traditional trio of Germany - Holland - Denmark back on the podium. However, several riders that did not make it onto the podium had a glorious test today and will be part of the ones to watch for the individual medals on Saturday and Sunday.

The rider that produced the most exceptional test was British Annabella Pidgley on the 11-year old French bred Hanoverian gelding Sultan des Paluds. The chestnut was the silver medalist at the 2017 World Championships for Young Dressage Horses in Ermelo and trained up to Grand Prix level before selling to the Pidgley family in March 2021. Annabella immediately gelled with the gelding and they were straight away nominated on the British team for the 2021 Euros after scoring a hattrick and their first and only CDI this year.

Scoring well at a CDI in Great Britain against no foreign riders is different from competing in a CDI on the European mainland against the riders of more than a handful of nations, but Pidgley proved herself worthy and not only that, she rode a magnificent test on which there is very little to comment. The trot was very elegant and smooth, with a great flow in the traversal movements. The extended walk was good, the collected nice and clear in the rhythm. The left turn on the haunches was a tiny bit tense. The flying changes were very nice and secure, the transition from extended canter to collected canter was fabulous and throughout the ride the horse was in a soft, steady contact. In addition, they three times rode a fantastic, balanced, square halt. Bravo!

Germany's highest scoring rider on the team was the last one to go, Lucie-Anouk Baumgurtel on the 9-year old KWPN gelding Hugo (by Spielberg x San Remo). Baumgurtel already has three European Pony Champion's titles down her belt as well as three years of competing at junior level, so despite her 17 years of age, she is the senior on the team when it comes to experience and performance record.

Baumgurtel showed incredible routine and test riding skill on Hugo, but the trot on the right lead could have been a more steady in the rhythm and elastic in the back. The rein back had short steps though and in the collected walk the 4-beat rhythm was a bit compromised, especially before the right turn on the haunches. The extended trots were expressive and the flying changes were very secure and uphill. Baumgurtel received 75.364% from the judges with 72.727 (Voser) as low score and 77.273 (Schwab) as high score.

The second highest score for Germany was contributed by team newcomer Lena Merkt on the Hanoverian stallion Sarotti Mocca Sahne (by Soliman x Lauries Crusador xx), who scored 73.212% on Wednesday and ended up in 6th place on the ranking. The third score came from Jana Lang on the 15-year old KWPN gelding Baron (by Johnson x Krack C) who placed seventh. Lang had to do a lot of riding on the bay gelding and was working hard in the saddle to activate him from behind, especially in trot, while doing a lot of half halting in front. She rode the trot work with much energy, but overrode the shoulders-in with too much bend and almost on five tracks. The uphill extended canter was a highlight  as well as the flying changes, although the third one was crooked.

They scored 73.000% to assist Germany to reach the highest step of the podium.

The Dutch team landed the silver with Sanne van der Pols on the 12-year old KWPN gelding Excellentie (by Don Shufro x Riverman).  The duo are no team newcomers. Already back in 2018, Van der Pols rode Excellentie on the Dutch team at the 2017 and 2018 European Children Championship and last year she represented Holland at the 2020 Junior Europeans with her second horse Cuvanck PP. This year she was nominated with Excellentie.

The tall black gelding is a ground covering mover and he impressed with his good rhythm and go in the trot tour. His walk is tricky and it was obvious that the judges disagreed on the score.  Excellentie's extended walk has massive overtrack but is almost lateral in the rhythm (6.5 - 7.0), in the medium walk in between the turns on the haunches he gets slow in the rhythm and almost ambles (4.0 - 7.0). In the turns he needed to be quicker behind (5.5 - 8.0). The black has much scope in canter and the flying changes are mega! They were super uphill but the horse got strong in the contact and a bit long in the body. The extended canter was very good, but on the final centerline he anticipated the halt too early and stalled. They posted a big score of 74.242% on the board which ranked them third and pulled Holland onto the silver step of the podium.

The second best Dutch score came from Evi van Rooij on Don Tango B. The pair were the overnight leaders with 73.879%. Holland's third score came from Robin Heiden on the very young, 7-year old KWPN stallion Jivando S (by Desperado x Nourejev), who has three phenomenal basic gaits but had a string of mistakes. He broke into canter in the shoulder in right and again at the start of the half pass right, one flying change was broken and one in two phases. Nevertheless this gorgeous green stallion excelled in his extended walk and canter. He still got a 69.970% and landed 21nd place.

Denmark's best was Frederikke Gram Jacobsen on the 11-year old Danish mare Ryvangs Zafina (by Zack x Come Back II). They were 11th with 72.576%. The compact bay mare has a lot of cadence in trot, although the overtrack in the extensions is quite limited or she gets hurried in the rhyhthm. Zafina dragged the legs a bit in the rein back, but overall the trot tour had a lot of energy. Zafina's highlights are most definitely the uphill flying changes and also her medium walk was clear in the 4-beat rhythm. Overall she was very consistent in the contact.

Denmark's second and third score came from the riders who competed on Wednesday: Annabelle Rehn on Vestervangs Garson (by De Noir x Ragazzo) on 71.515% and Sophia Ludvigsen with Blue Hors Quintana (by Quantensprung x Desperados) on 71.394%.

Denmark's last rider to go was Alexander Yde Helgstrand on the 16-year old Danish mare Grevens Sa Va (by Blue Hors Soprano x Romancier) and a lot of pressure and expectation rested on his shoulders to take the Danish team to a higher place on the podium. Unfortunately the duo had an off day. Sa Va did not find her groove in the arena despite a strong beginning with a very good halt at entry. Three times she broke into canter on the centerline and twice in the half pass right. The halt for rein back was not square but the rein back itself was good. She was overbent in the shoulder in right, but the extended walk had two hooves overstep and was good. The walk pirouettes missed some fine-tuning and she jogged in the medium walk, much to the frustration of the rider, who half halted abruptly and the mare reversed. In the canter the duo did show the potential there is in there with super big, uphill flying changes. Also overall the bridle contact has improved considerably compared to last year, so the duo has definitely grown but today was just not their day. They were 64th with 61.304%

Austrian Paul Jöbstl and the 12-year old Hanoverian stallion Bodyguard (by Burlington x Pik L) executed a very strong test that placed them fifth with 73.283%. The trot work was smooth although the horse sometimes drops in the poll; the rein back had big steps, the walk pirouettes went well. The strike off into canter was difficult with the horse jumping hard into the contact and the second flying change short behind, but overall the test was full of quality work and great accuracy. Unfortunately the horse changed behind right before the final halt at X. There certainly are more points in there if the creases are smoothed out.

French Mathilde Juglaret impressed on the 9-year old Lusitano stallion Caporal de Massa (by Rieto x Xaquiro). The grey was much overbent in the shoulder in right, but the trot extensions were great and there was good overtrack in the extended walk. The horse showed very good crossing of the legs in the half passes.  The medium walk was tense and short, but the horse was scopey in the extended canter and the flying changes were big and uphill. They scored 72.758% and placed 8th.

Belgium's Jette de Jong has a wonderful horse in the 9-year old KWPN gelding Heavenly Charming (by Charmeur x United). She rode her test with much routine and confidence, especially in the canter work, in which the horse showed phenomenal tempi changes and extended canter work. The trot work appeared a bit rushed and could be more off the ground and collected, but overall the pair could certainly climb into the top five. Now they were 9th with 72.697%.

Talking about impressive flying changes: watch out tomorrow for Swiss Meilin Ngovan and the 9-year old Oldenburg bred Dreamdancer (by Desperado). The liver chestnut showed some of the best of the day. They were 12th with 72.273%.

Probably the most underscored combination of the day was Hungarian Lilla Felvinczi, who rode her 10-year old Danish warmblood Bonjour Majlund (by Bogegardens Boney M x De Noir) in a snaffle. The black gelding with stripe is maybe not the best muscled horse and needs to develop a rounder musculature, but Felvinczi rode a lovely test. She had her horse in a very soft contact, rode a good walk, super changes and uphill extended canter. The horse was very consistent in the frame and it was a lovely test overall. They got 70.485% to rank 19th.

The individual test starts on Friday 9 July with the first group going in the morning.