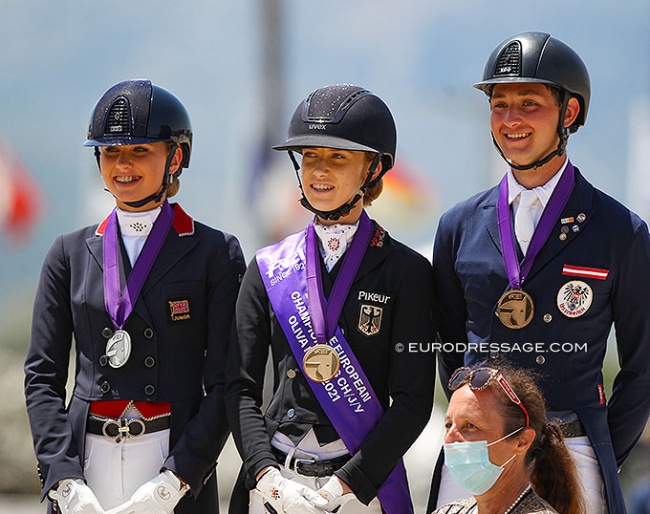 German Lucie-Anouk Baumgurtel topped the board and captured the individual test gold medal at the 2021 European Junior Riders Championships in Oliva Nova, Spain, on 10 July 2021.

The Junior Riders individual test lived up to the standards of what a real sport competition should represented: a mix of different nations having an equal chance at medal glory. Baumgurtel shared the podium with British Annabella Pidgley (silver) and Austrian Paul Jöbstl (bronze).

The second group of junior riders contested the individual test on Saturday morning at the MET equestrian grounds. Full sunshine and a crisp blue sky brought a holiday feeling to the competition which is framed by gorgeous palm trees and oleanders in bloom. The individual test was judged by the same panel as the team championship test (Ringmark, Voser, Schwab, Smeets, Ebert).

The strongest riders came early in the morning and Baumgurtel was the last rider to really make a throw at the top score of the day. The triple European pony champion rode her first Europeans as a junior and seems bullet-proof to nervousness.

Aboard the 9-year old Dutch warmblood gelding Hugo (by Spielberg x San Remo) she had to beat the provisional top score of 75.382% which Pidgley had set an hour before her. The German rider, who is almost a (semi-) professional with her own dressage training and breeding stable, Freiberger Hof, lived up to the expectations and proved her mettle.

Coached by former German pony team trainer Connie Endres, she had her horse on point in the individual test. While there were still a few little niggles in the team test, Baumgurtel had ironed out those creases in the individual. Hugo, who was trained to FEI level by Marcus Hermes, was much better in the bridle contact today. He produced super trot extensions and especially the shoulder in right, half voltes and half pass left were outstanding. A rattling waste container lorry that loudly came passing by, did not shake the pair's confidence and ther merrily steamed onwards through the trot work. The horse could have stretched a bit more when given the reins in trot, though. The right walk pirouette was a bit big but good in rhythm. In the canter work the left extension was a bit flat and the simple change would have been more collected, but otherwise Lucie and Hugo were on a roll, riding safe flying changes and completing the test with a strong begin and end halt.

British Annabella Pidgley and the 11-year old French bred Hanoverian gelding Sultan des Paluds (by Soliman x De Niro) were the surprise but rightful winners of the team championship test. The pair therefore became the favourites for gold in the individual test and led the ranking for a while, only to be overtaken by Baumgurtel at the end.

While Baumgurtel presented an improved Hugo in the individual test, Pidgley and Sultan were on excellent form, but the level of accuracy, that made them steal the show on Wednesday, was a tiny bit less today. They began with a good halt at entry and extended trot, but the horse dropped a bit behind the vertical in the left half pass and his head position was not as stable throughout the test. Sultan often became too light in the contact, not enough seeking the connection. The second trot extension was ground covering but a bit hurried. The shoulder in left and half voltes were outstanding and overall the trot work was very elegant and soft footed. The extended walk was active and clear, but in the right walk pirouette there was a small hesitation. In the canter, Sultan did not always stay nicely up in the frame and there could have been a bit more collection and power from behind, but Annabella still rode the horse beautifully through the canter movements and flying changes. It was a lovely test and the 75.382% total score well earned.

The pair placed first with two judges and fourth with three. Their individual scores went from 74.412% (Schwab) to 76.912% (Smeets)

The rider with the biggest smile on his face today was Austrian Paul Jöbstl, who landed the bronze medal. He was the overnight leader on Friday, topping the board provisionally with 74.647% and only saw Baumgurtel and Pidgley pass him by on Saturday.

Jöbstl leased the 12-year old Hanoverian stallion Bodyguard (by Burlington x Pik L) from owner Josef Wilbers this 2021 show season and the pair has gone from strenght to strength and victory to victory. They have won all six classes at the two international shows (Sint-Truiden, Ornago) they competed at this spring season prior to being selected on the Austrian team for Oliva Nova.

In the individual test at the Europeans the pair produced a very smooth trot tour with good energy and an even rhythm. The bending on the left voltes could have been more, but the horse stretched well into the contact when given the reins. The extended walk was ground covering, but there was loss of balance in the right walk pirouette. The extended canter was uphill and the flying changes expressive. The end halt missed the finishing touch and wasn't square.

They were rewarded with a 74.647%, a score which made them the overnight leaders on Friday. On Saturday only Baumgurtel and Pidgley moved in front. Four judges ranked them third and one judge had them eighth. The marks were fairly consistent though: between 73.235 and 75.735%.

Just Off the Podium

Dutch Evi van Rooij and the 13-year old KWPN gelding Don Tango B (by Contango x Jazz) just finished outside the medal earning spots and landed fourth place. The petite Van Rooij did an admirable job presented the former licensed breeding stallions, who had already had a string of riders (Emmelie Scholtens, Diederik van Silfhout,  Gert Van den Hof, and Maud de Bruijn) but none of them were able to get the international recognition and flair that Van Rooij had achieved here in Oliva Nova.

The tall gelding showed big trot extensions, which were a bit rushed and there should have been more bending to the right, but Van Rooij had the stallion in a nice, steady contact. In the trot with the given reins the horse did not stretch enough into the contact but the shoulder in left was lovely. The extended walk had two hooves overstep, but could have more V-moment in the rhythm and there was a loss of impulsion in the right turn on the haunches. The canter work flowed well with big changes, two of them a bit croup high. They earned 74.500% which placed them fifth.

Danish Alexander Yde Helgstrand had his moment of redemption on the 16-year old Danish mare Grevens Sa Va (by Blue Hors Soprano x Romancier) after a team test that totally did not go as planned. The black mare and his rider were not on the same wavelength and a string of miscommunications led to a low 61% score.

In the individual test, however, they found each other again. The mare presented superb trot extensions in which she really climbed and got uphill in the forequarters. Helgstrand rode the horse with a lot of forward energy, but when she was given the rein did not sufficiently stretch the nose out. The bending to the left could also improve and there was some tilting of the head in the right volte and extended trot. The extended walk had very nice overtrack and was clear in the rhythm but a bit hurried. The flying changes were super.