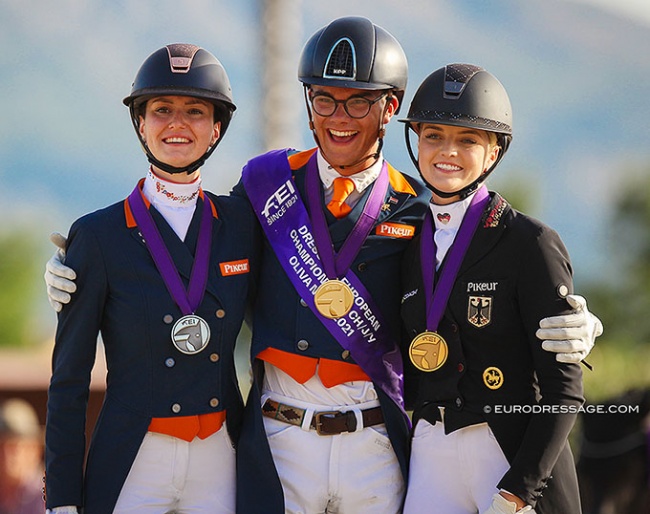 After winning individual test gold at the Europeans in Budapest in 2020, Luiten has begun a real charge for power as the best Young Riders in Europe here in Oliva Nova.

Back to Gold for Luiten

Luiten began his conquest in Spain by winning the team championship test and team gold medal with a supreme score of 77.677%, almost four percent ahead of the rest of the competition, on Thursday. He continued his winning streak on Saturday with an even higher score, 79.617%.

Luiten and Willeke Bos' 11-year old KWPN mare Fynona (by Ampere x Gribaldi) produced an outstanding individual test. The trot work was ridden with much control and calmness. The trot extensions were regular, the lateral movements flowed, only the rein back had uneven steps and overall the mare was quite tight in the neck. In the extended walk, however, she stretched the nose out and achieved good overtrack and relaxation. The pirouettes were delicious, the four tempi changes ground covering, the extended canter a tiny bit tense in the back. The halt at entry and final halt were all well collected and square but fully ridden with the hand instead of the seat.

The judges' panel, consisting of Sanders-Van Gansewinkel (NED), Christensen (DEN), Colliander (FIN), Guerra (ESP) and Lang (AUT) were enraptured by the ride and unanimously placed the combination first with scored going from 77.647% (Guerra) to 80.735% (Sanders-van Gansewinkel).

Luiten is a semi-professional rider who combines a riding career, training no less than five horses, with university studies. He is in his second Bachelor year of Business Management at the University of Groningen. After producing two high class rides and earning two gold medals, he is the undisputed favourite for the kur gold on Sunday.

Rockx on a Roll

Dutch Thalia Rockx is on a roll in Oliva Nova. After riding the third best score in the team championship test, she promoted herself as a candidate for an individual medal, something that stays in the back of the mind of all who follow the competition from day one.

Daughter of Dutch Grand Prix rider Johan Rockx and former Canadian international Grand Prix rider Penny Zavitz-Rockx, Thalia has grown up amongst horses and is now riding on the Dutch team for the fifth time. She competed at the Europeans from 2017 and never missed a team selection. In 2020 she was unfortunately eliminated in the team test and her European campaign ended prematurely in Budapest. In Oliva Nova she seems to have come back with a mission and is certainly succeeding at it.

Riding her home bred 10-year old KWPN gelding Golden Dancer de la Fazenda (by Bretton Woods x Florestan), Rockx was the overnight leader on Friday, scoring the highest mark, provisionally, in the first group of riders. Her score without stood the heat from another 30 something riders and in the end landed her a second place and silver medal.

The tall liver chestnut really is such a good fellow and so willing to work for his rider, despite being slow in the hindleg. He wants to do the job. He was forward in the trot work without losing balance on the voltes and in the traversal movements. The rein back was not so pretty though, but he walked will in the rhythm in the extension and collection. The canter half passes were balanced, the changes sweeping and only the final halt could have been more polished.

The German young riders have been having a "tough" Europeans in Oliva Nova. Used to being considered the favourites for gold, this is the second year in the row that they have been outclassed by the Dutch and they are forced to put in a chase. There is plenty of horse and training quality on the German team, but the pieces of the puzzle just simply don't seem to come together this year for gold.

The rider that came out of the German team selection trials the strongest - Luca Sophia Collin - was "only" fourth in the team test and she would certainly do her best to gain a medal in the individual. Her 11-year old Hanoverian gelding Descolari (by Desperados x Weltmeyer) is an outstanding mover with so much elasticity and bounce in trot, the best walk of all horses at the Europeans and plenty of class in canter, but this year he misses some collection and polish in his tests and has not really steadied in the bridle contact over the past year.

In the individual test Descolari did not stand immobile in the halt at entry nor at the end. He also dragged his legs and got crooked in the rein back. However the trot work was, of course, bouncy and swinging, with very good lengthening of the stride and frame in the extensions. The trot half passes were particularly beautiful. In canter Descolari lacked collection and there was a hiccup in the change in between the half passes, the four tempi changes were crooked, but the left half pirouette was small and well ridden.

The basic gaits of the horse as well as the overall sympathetic silhouette of softness must have led the judges to reward the ride with a 73.40%. The five judges were on the same wavelength with their individual scores.

Sergio Moron Basoco on the Rise

Spanish Sergio Moron Basoco has been on the rise, riding a personal best score in the team championship test and realizing that a place on the podium is no longer impossible.

He was the third last rider to go in the individual test and kept everyone on the tip of their toes. Moron and his 11-year old Dutch bred Farnham L (by Furst Rousseau) have been going from strength to strength at this show. In the individual test he rode a smooth, regular trot tour. The extended trot had lots of overtrack but there could have been more V-moment in the rhythm. The tempi changes are expansive, the changes to the left in the four tempi were a bit wild, the three tempi changes were super. The right half pirouette was the best one. Overall, the rider's hand should be a bit more quiet as the half halting is quite visible, and the nose could come out a bit more for an even better silhouette.

Moron and Farnham L received 72.912% with individual scores between 71.765% (Colliander) and 74.706% (Sanders). He placed fourth, just off the podium, but based on the screams of the crowds, could easily deserved to have been the bronze medalist.

Danish Sara Aagaard Hyrm and her 15-year old Danish gelding Skovborgs Romadinov (by Romanov x Mago xx) completed the top five with a 72.853% earning test. Sara's liver chestnut gelding showed good energy and bounce in trot, also on the voltes. The extended walk had much overtrack but could have been clearer in the rhythm. The four tempi were correct, the left half pirouette needed a bit more collection. The three tempi were very nice and the extended canter uphill. They lost a few points with the end halt that wasn't square.

German Elisabeth von Wulffen had her moment of redemption in the individual test after going off course in the team test and several mistakes. She tied in fifth place with a generous 72.853%. Von Wulffen's 12-year old Oldenburg mare Fiesta Bonita (by For Compliment x Rubinstein) is a top class horse with outstanding gaits, but the pair needs a bit more fine-tuning to get the really big marks. The halt at entry was not immobile, but the trot extensions were superb. Fiesta Bonita has a very expressive frontleg with much freedom of the shoulder. Overall the nose was a bit too tucked in throughout the ride. The extended walk had very nice overtrack and relaxation. In the tempi changes, the mare is consistently shorter behind in the changes to the right and there was a loss of impulsion before the left pirouette. In the extended  canter the mare threw in an unscripted flying change in front. Von Wulffen and Fiesta Bonita are definitely a promising pair for the future with much potential for growth. Today they seemed a bit out of their comfort zone as also the final halt was rushed without allowing time for the horse to become immobile in the halt.

After placing second in the team test, Dutch rider Milou Dees tasted individual medal glory. Aboard the 11-year old KWPN gelding Francesco (by Florencio x Krack C) she rode a test that was superior to the one she produced two days before. The horse looked much more settled, wasn't profusely sweating and there was an outstanding flow from one movement into the other. The long-legged bay gelding has a very bouncy trot, but tends to get a bit too passagy. The trot extensions are huge and the three tempi changes and extended canter were very uphill. Overall the horse should be a bit more equally elastic on both reins as the contact with the left snaffle is stronger. Two big mistakes (in the four tempi and right pirouette) pushed the score down to 71.941% and an 8th place.

The Young Riders competition will come to a conclusion on Sunday with the Kur to Music finals.