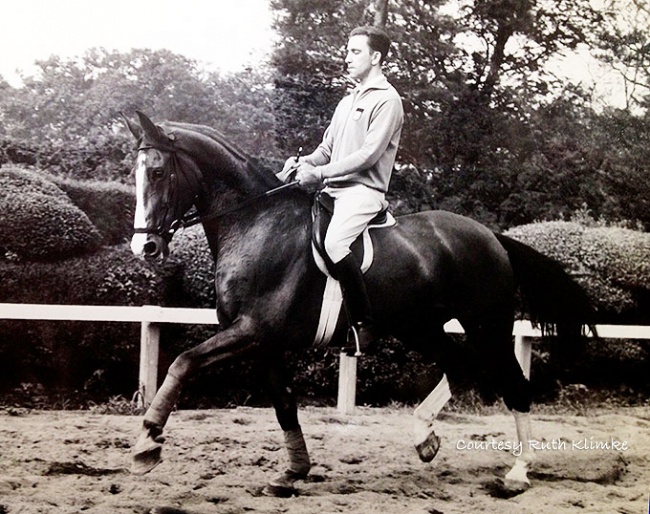 by Silke Rottermann for Eurodressage
This article is a continuation of the 1964 Tokyo Olympics:
Part I: Team Competition in Jeopardy and Dangerous Travels to Tokyo by Air and Sea
Part II: Paul Weier on Pioneering Horse Transport to Tokyo, by Air

Grete Kemper (née Klimke) is the sister of the late Dr. Reiner Klimke. Herself an accomplished rider, she accompanied her brother and his Hanoverian gelding Dux (by Duellant, *1951) as a groom to the Olympic Games of Tokyo 1964 and Mexico City 1968.

Eurodressage asked her to reminisce the Olympic Games in Japan which Mrs. Kemper did in August 2019.

The journey with the horses began in Amsterdam with a cargo plane of the KLM company about four weeks before the competitions started so that the horses had enough time to acclimatise . Vets and grooms were on board and the care for the horses was pretty personal. I flew with the riders though. There was no special preparation for the horses to fly, but they had all been experienced competition horses for who traveling was part of their lives.

Gustav Pfordte, chef d’equipe of the jumping riders, had chosen the shortest air connection to Tokyo-the so called polar route—to minimize the stress for the horses. Unfortunately there were turbulences over Tokyo and this news of course worried the riders. My brother Reiner and I discovered that Dux had sustained an injury to the root of his tail in the narrow box during these turbulences. Luckily after three days of rest and treatment by our vet, Dr. Büsing, he could be ridden again. Not all horses travelled by air. It was said in Tokyo that the Soviet horses were transported to Japan by ship. Their horses appeared tired.

The equestrian facilities were located outside Tokyo. The training possibilities and stables were pretty good, it didn’t lack anything. The whole property was very large so that we could work the horses either in the dressage arena or outside and we could also hack them for relaxation. There were several favourites for the individual competition. Of course the defending Olympic champion Sergej Filatov from the Soviet Union with his winning horse from Rome 1960, Absent, or the Swiss Henri Chammartin whom my brother and I often watched during his training in Tokyo. He worked with almost invisible aids, over all during the one time flying changes.

During the competition itself the weather was rainy and foggy and I am sure that the horses had presented themselves even better in kinder weather conditions. As the equestrian centre was located outside Tokyo, the spectators had to drive there. The tribune along the arena wasn’t very big, but big enough for the spectators who came to see dressage.

When I think back of the Olympic Games in Tokyo 1964, of course the sport and our horses are the first thing to come to my mind. The rides were very very good for that time and impressed me. But it also remains unforgettable how amiable the Japanese welcomed us. Our accommodation near the horses was simple, but every day we had new gifts like paper flowers or garlands made of colored paper there.

One day we did a trip to the Meiji Park. There we learnt about the old culture of the Japanese and had been invited to a tea ceremony. There we felt the great hospitality of the Japanese, too. This feeling we did not get four years later in Mexico-City. We felt safe, but it wasn’t that informal and happy like in Tokyo before. In Mexico there were more security measures, whereas in Tokyo we could still attend other sports as spectators simply with our accreditations.  That way we had more in Tokyo than in Mexico the feeling to belong to the big Olympic family.