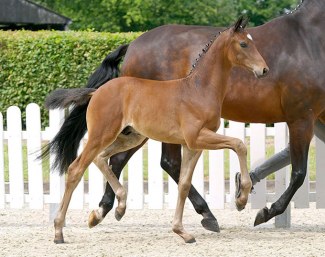 Zauber became the best seller of the 2021 Westfalian Hybrid foal auction which took place on 31 July 2021. The colt by Zauberlehring x De Niro sold for 62,000 euro.

He will move to a stallion breeder and trainer in North Rhine-Westphalia.

The second most expensive foal was Live Music (by Life Time x Sir Heinrich), which sold for 30,000 euro.

The most expensive filly was Fantasy (by Franziskus out of St.Pr.St. Ratina B (by Rock Forever), the 2017 Westfalian champion mare of the Elite Show. Local customers bought her for 18,500 euro.