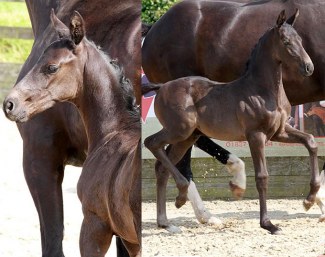 Records were broken on Sunday with Newton Double Take awarded the highest score ever given for a foal premium by the British Hanoverian Society at Newton Stud’s foal grading.

Over 50 foals were presented at Newton Stud to the British Hanoverian Horse Society, Anglo European Stud book, Sport Horse GB and the Oldenburg Verband as part of the studs annual evaluation.

Highest scorer of the day and a record breaker for a British Hanoverian premium was Newton Double Take, a superb colt (by D’Egalite) by embryo transfer out of the successful Grand Prix mare Newton Domino (by De Niro x Rubinstein) with an overall score of 9.1.

Newton Domino has enjoyed a  successful season winning at Grand Prix with Anna Ross and was approved into the Hanoverian Studbook on the day with a high score of 8. Domino was born and raised at Newton Stud and is out of one of the stud’s most successful broodmares, St Pr Grandiosa, who is now happily retired in Newton’s fields aged 26.

The foals were evaluated over a gala day which included presentations from the Elite Dressage team and included a lovely moment where ‘Grandiosa’ (by Rubinstein x Grenadier) was shown in hand, alongside her daughter Newton Domino passaging alongside under international Grand Prix rider Anna Ross.

They were accompanied by Smash Hit’s daughter, Newton Tiger, presented by international Grand Prix competitor Alex Baker, who will partner Tiger at the upcoming World Breeding Championships in Verden before competing her own horse Dutchman on the Senior Irish Team at the European Championships in Hagen.

The successful breeding collaboration between Elite Dressage and Newton Stud expects 45 foals next year with 35 of them by embryo transfer from the top sports mares. The close proximity to the expertise of Irma Rosati from Equus Vets and the studs recipient mare herd have helped this partnership grow into one of the most prolific sports horse producers in the UK.

The 2021 Elite Dressage Foal collection is available to view at https://youtube.com/playlist?list=PLzKp_6aZ7-i3V96JBCQVhg3m6qX2H9vSx