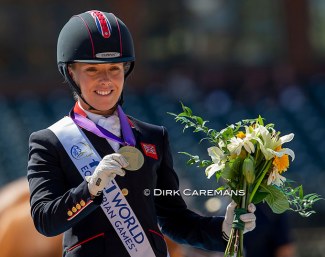 Set to make a third consecutive Games appearance for Paralympics GB, Sophie originally had Don Cara M named as a direct reserve for her selected ride C Fatal Attraction, and has been preparing both horses for Tokyo in tandem.

British Equestrian Para Performance Manager Georgina Sharples commented; “Sophie, her home team and the World Class Programme equine sport science staff have done everything possible to have C Fatal Attraction fit and ready for Tokyo, but we have to put his welfare first. We are grateful for the support of his owner Charlotte Hogg, and hope that she and ‘Jorge’ will have further chances to represent Great Britain with Sophie at championship level. In Don Cara M, Sophie has an equally able partner. She has worked hard this year to build his strength and consistency to match his talent and presence and we are looking forward to his Paralympic debut. Thank you to owner Roland Kinch for allowing him to make the trip to Tokyo.”

The para dressage horses are currently in quarantine ahead of flying to Tokyo on 18 August.

Roland Kinch’s Don Cara M is a dark bay gelding by Don Jovi.. He bred by H. Melis in The Netherlands.