Blake and Carnegie on Form at 2021 CPEDI Bishop Burton 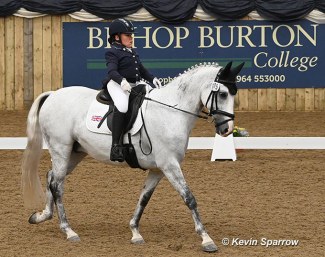 Gabriella Blake and Strong Beau were in excellent form, winning all three of their Grade I classes in the 3* competition at Bishop Burton CPEDI 1/2/3* on 9 - 13 August 2021.

The pair shone with no score less than 74% in all three phases, improving on their scores from the Hartpury CPEDI in July.

Beau is a British-bred registered Connemara and is now 11 years old. Gabriella bought him three years ago. “He’d done some eventing but he didn’t really want to jump and wasn’t enjoying hacking either,” explained Gabriella who trains with Paralympian Sophie Wells. “He loves his [dressage] work and as soon as he gets in the arena he knows what his job is.”

Gabriella’s mum Estelle is her carer, groom and rider and warms up Beau at shows. “All my scores at Bishop Burton were personal bests. I enjoyed every minute. He’s a perfect para pony. He can be quirky but when he does his job he looks after me. He knows when he’s done well and gets a bit cocky and ‘look at me!’”

Another star of the 3* event was Australian rider, Tilda Carnegie, who won all three of her Grade IV classes, including a 71%+ in the Freestyle. Her dancing partner was Boccelli 6, who she has leased from owner Leslie Forlee. Boccelli was originally competed up to Inter II by Katie Bailey who now trains the pair. The 17hh Bellissimo gelding is 14 years old.

“Boccelli is a golden boy who likes everyone and is a very willing and happy chap. But sometimes in a way it can be difficult to form a special bond with a horse who likes everyone. I spent a lot of time with him, and my hearing disability has made me good at reading non-verbal cues and this extends to reading the expressions on horses. So I tried to read his face cues about where he liked to be scratched and brushed and build up the bond that way,” said Tilda.

“Katie has done the most amazing job producing Boccelli 6 and is such a talented trainer. Boccelli is one of those rare gems that is super-talented and has the temperament of a saint, you usually get one or the other in a horse.”

“I needed to learn to ride him in a way that the quality and basics were solid. He can be quite laid back and sometimes a bit lazy, so you do need to be able to apply aids effectively to get the best out of him. I have had to work hard on my fitness, a process that is still ongoing.”

“I have also never cracked the 70% barrier so consistently before. I’m grateful to both Leslie and Katie for giving me this opportunity.”

Shirtcliffe Does the Double

Hermione had a little spook in the Team Test which meant that Kevin could snatch the win but settled to do a solid 68.41% in the Individual Test. Amanda has had the nine-year-old Vitalis mare for a year and she has only been lightly competed. She was bred in Britain by Pat Ruck and wasn’t backed until she was six.

After the Individual, she pulled a shoe and Amanda had to ride a rather enthusiastic Kevin in the Freestyle where they came second to Irish rider Katie Reilly. “He’s a big chap and a bit cheeky – he knows how to get the better of me!”

Natasha Adkinson and Jemima Green swapped first and second places in the Grade II tests in both the 2* and 3* sections.

In the 3* tests, Jemma and Elrite (by San Remo) won the Team and Individual tests while Natasha and Sweet Caledonia (‘Cally’) picked up the win in the Freestyle with 71.15%.

Jemima has owned ‘Echo’ since she was four. “She has a very active brain so she does able-bodied competitions with Virginia Cundy. Her way of going has improved a lot recently. I was thrilled with her at Bishop Burton. She lost her confidence in a freestyle test a few weeks ago so she showed a little tension but she coped really well for a green horse,” said Jemima who trains with Marcia Cundy.

“Cally loves her music and knows it really well,” commented Natasha who has been having on-line training with Tamsin Addison, Irish Paralympic team rider, while she was shielding for a year because of Covid. “She tried her little heart out. I’ve had her since she was six weeks old so I know her really well. She loves to show off so I have to try to keep it all together.”

Read full article with photos and scores on British Dressage