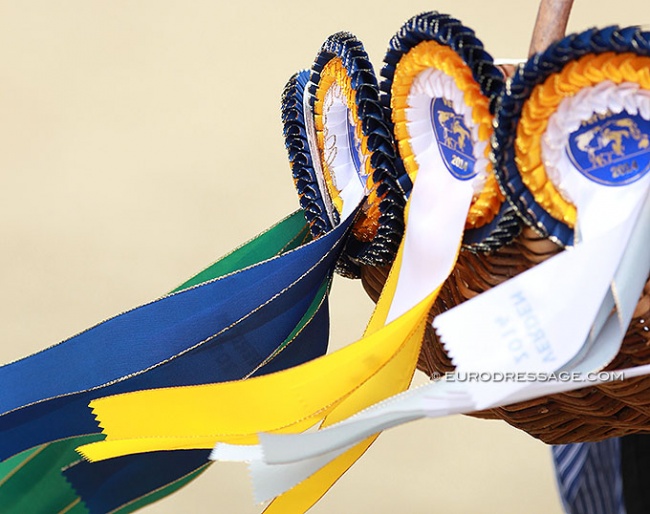 (press release) - Young, exceptional dressage horses will be the focus of Verden International from August 25 - 29. Dressage at its best dominates the FEI WBFSH Dressage World Breeding Championships for Young Horses, as well as the national Nurnberger Burg-Pokal (German Developing PSG circuit) and the Almased Dressage Amateurs series. The view into the future starts even earlier with the Herwart von der Decken Show (Hanoverian Elite Mare Championship) of the Hannoveraner Verband on Monday, August 23, on the versatile show grounds.

Breeding and sport meet at this location, an idea that has been cultivated by Verden's show organizers for very many years. The situation resulting from the regulations for protection against the Corona pandemic changes framework conditions and challenges, but does not slow down the enthusiasm of the organizers.

Event Manager Ulrike Kubelke: "We are allowed to sell up to 500 tickets per day of the event. That is better than it would have been for last year's planned World Championships in December 2020, but certainly still a long way from the usual dimensions. The cooperation with the authorities involved is very good and helpful. We are grateful that our partners and sponsors continue to support us and that we have also succeeded in gaining new sponsors for Verden International."

At some point, decisions have to be made, underlines Ulrike Kubelke, in order to obtain planning security. After all, no one can predict how exactly the pandemic situation will develop. For Verden's hotel and catering industry, the news came at the right time, because with the participants, horse owners and guests, there are also booked overnight stays and thus capacity utilization.

Internationally, there is great relief that Verden will be the venue for the 2021 World Championships for Young Dressage Horses, because the grounds are familiar, have been over-planned and modernized in the past year and a half, and the experience in organizing championships by pVerd-Event GmbH is great. After all, Verden is de facto the "birthplace" of the Dressage World Breeding Championships.

The World Championships for five, six and seven year old dressage horses are the absolute highlight of the five show days in Verden. A total of 133 horses from 22 nations were nominated for the most important championship in this age group. The variety of breeding societies and nations sending WEG candidates to Verden has continued to increase compared to the early years.

In each age group, the World Championship candidates will be presented in a qualification test, from which the best horses will qualify directly for the final. This is followed by the so-called small final, from which the best horses can again qualify for the final. A modus that offers chances if, for example, a young horse remains below its possibilities in the qualification or is distracted by the foreign environment.

Verden has always offered more than the World Championships and that will be the case in 2021 as well. The Nurnberger Burg-Pokal for seven to nine year old horses with the St. Georg Special competition will be held in Verden. The goal is the final of the series, which has been held for more than 30 years, in Frankfurt in December.

Ulrike Kubelke can proudly point to 28 entries from all over Germany for the two-test tour. Verden International is one of the most popular of the twelve qualifications held throughout Germany.

Almased Dressage Amateurs, a series of competitions aimed explicitly at dressage riders who are not conquering the dressage arena as professionals, is still young but nevertheless a project with a future. At each of the four tournament locations, a small tour at Intermediaire level and a large tour at Grand Prix level are offered. And Almased Dressage Amateurs is competing internationally. "I'm pleased that we also have three Danish participants here for the first time at Almased Dressage Amateurs," says Ulrike Kubelke, "that's a good sign because amateurs often keep to themselves in their respective countries, but in Verden it will be more international."

Before even the first young dressage horse lines up for the warm-up, the best Hanoverian and Rhinelander mares own the arena. The Herwart von der Decken Show for the best mares from all breeding regions of the Hannoveraner Verband is a classic in the calendar and provides information about the development and quality of the so important mare population. On Monday, August 23, starting at 8:30 a.m., the best Hanoverian mares, sorted by jumping or dressage pedigree, will present themselves to the judges and also to the public.

For the international guests and those interested in breeding, the connection to Verden International is a great advantage, as multiple journeys are no longer necessary. For the horse breeding the "stage" Verden is a good advertisement.

Verden International and, of course, the FEI WBFSH Dressage World Breeding Championships for Young Horses will be broadcast in their entirety by the equestrian sports portal www.clipmyhorse.tv. This means that even those who can't come to Verden can be reached and won't miss anything through the livestream.

A maximum of 500 visitors are permitted on site. In addition to a valid ticket, the three-G rule, i.e. proof of being fully vaccinated or recovered or tested negative, is a prerequisite.

Unlike in previous years, access to the grounds is only possible via Gate D in the Lindhooper Straße. All other entrances are closed. Anyone entering the grounds can check in via the Luca app, as well as via the federal government's Corona Warn app, and is thus registered.

Tickets for Verden International are available online at https://www.ticketmaster.de/artist/verden-international-tickets/981934?language=en-us?.