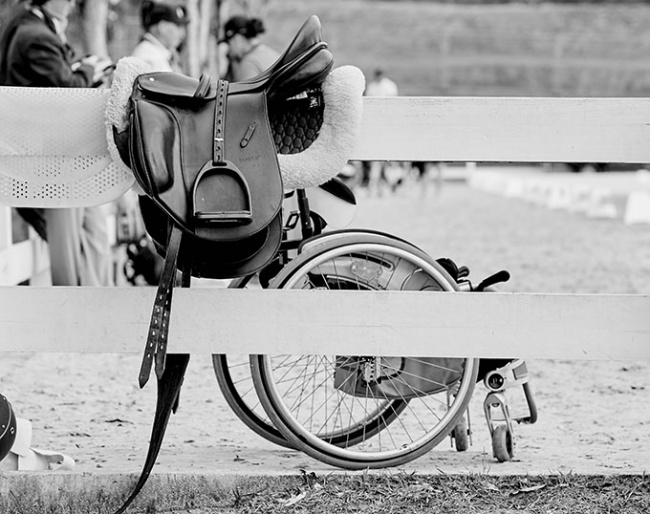 With a mix of debutant and experienced athletes set to take centre stage at the Tokyo 2020 Paralympic Games, the Para Equestrian field is wide open.

In all, there are 78 Para Equestrian athletes from 27 nations confirmed in the list of definite entries published by the FEI today. Among them, one of the sport’s most enduring athletes, a strong contender for a ‘triple-triple’ and a Para Equestrian legend going for a record number of medals.

Tokyo will be the seventh appearance at a Paralympic Games for 60 year-old Jens Lasse Dokkan (NOR) who is the only athlete to have competed at every Paralympics edition since Atlanta 1996, when Para Dressage was introduced. Currently ranked World No. 5 in the FEI Para Dressage World Individual Ranking for Grade I, Dokkan goes into Tokyo with his mount Aladdin, following top three finishes in all his competition participations from 2019 to 2021.

As the current reigning World and European champion, Sanne Voets (NED) has her sights set high for Tokyo. The 34-year-old is looking to win the team, individual and freestyle competitions in Tokyo to give her the elusive triple-triple of golds at European, World and Paralympic level, a feat last achieved by Great Britain’s Sir Lee Pearson. Voets will be going for gold alongside her horse Demantur “Demmi” with a freestyle routine, developed in collaboration with top Dutch freestyle producer Joost Peters, and one of her country’s most popular bands, HAEVN.

Known as the Godfather of Para Dressage, Lee Pearson is himself looking to add to his medal tally of 14 Paralympic medals – which includes 11 golds – the highest of any Paralympic Equestrian. One of the most recognisable faces in Para Equestrian, Pearson made his debut at the 2000 Paralympic Games in Sydney where he won gold medals in the individual, freestyle and team. He won another three golds in Athens 2004 and then Beijing 2008, before a team gold, individual silver and freestyle bronze in London 2012. At the 2016 Olympic Games in Rio, Pearson brought home a freestyle gold medal and an individual silver. While Great Britain’s Para Dressage team has enjoyed unrivalled success at every Paralympics since Atlanta, this year in Tokyo the USA are the hot favourites for team gold.

The US charge is led by Roxanne Trunnell, who is currently the highest ranked Para Dressage athlete in Grade I and in the FEI Para Dressage World Individual Ranking. Trunnell has won at every outing in the first half of 2021 and together with her horse Dolton, they have swept the Grade I classes at key 3* international events in the USA. Trunnell also served up a world record score of 89.522% for an FEI Para Dressage Freestyle Test. Trunnell will be joined by three time Paralympian Rebecca Hart, as well as Beatrice De Lavalette and Kate Shoemaker who will be making their Paralympic debut in Tokyo.

“And while they will be a very different Paralympics to what we’ve been used to, these Games are an opportunity to bring Para Equestrian to the forefront. Equestrian sport is unique, with its hallmark being the close connection between athlete and horse. This relationship is all the more special in Para Dressage as the two athletes really become one.

“I know I speak on behalf of the whole community when I say how thrilled we are to have this opportunity following some challenging times. The Tokyo 2020 Olympic and Paralympic Games are a triumph over adversity. I send my deepest and most heartfelt gratitude to all those who have contributed to making the Olympic and Paralympic Games happen, and to the people of Japan for welcoming the international sporting community to what has been billed the Games of Hope.”

Although equestrian fans will see some old sporting rivalries play out, there are a number of athletes who will be making their debut appearance in Tokyo.

One of these athletes is 26-year-old Sho Inaba, an emerging talent on the Japanese Para Equestrian scene, who will be competing with his horse Exclusive. Inaba competed at the 2018 FEI World Equestrian Games™ in Tryon (USA) where he finished 14th in the individual test for his Grade. He has shown that he has what it takes to reach the podium, winning individual and freestyle medals at international competitions held in Gotemba (JPN) in 2019.

Currently ranked World No.1 in Grade III, Tobias Thorning Joergensen (DEN) was the breakthrough star of the 2019 FEI Para Dressage European Championship in Rotterdam (NED), winning gold medals in the individual and freestyle tests with his horse Joelene Hill, as well as team bronze. Joergensen is following in the footsteps of his mother Line Thorning Jorgensen who represented Denmark in Para Dressage at the 2004, 2008 and 2012 Paralympic Games.

Belgium’s Kevin Van Ham will make his debut following his impressive first major appearance at the 2019 FEI Para Dressage European Championship, where he placed fifth in the individual and freestyle competitions. Ranked World No. 7 in Grade V, Van Ham will be confident going into the Paralympics having topped the podium at the 3* international event in Grote-Brogel (BEL) in the individual and freestyle tests in June 2021.

Following the final selection, athletes will soon be making their way to Aachen (GER) for final training sessions and quarantine before continuing to Tokyo.