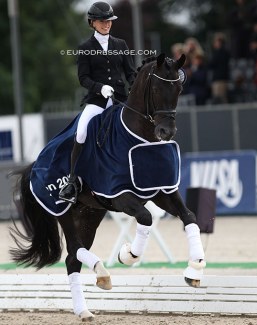 British Grand Prix rider Charlotte Fry is having the summer of a lifetime! After winning team bronze at the 2021 Olympic Games she added another World Young Horse Champion's title to her tally, her second one to date, this year aboard the KWPN licensed stallion Kjento. Her Dutch warmblood stallion was in total control of the 6-year old Finals at the 2021 World Championships for Young Dressage Horses in Verden, Germany.

The 6-year old Finals were the first age category that came to a conclusion with a medal finals at the 2021 WCYH on Saturday 28 August 2021. Although horrendous, rainy weather was forecast for Saturday afternoon, a few several-minute showers took place, but for the rest it stayed dry. Only Charlotte and Kjento as last pair to go had to brave a downpour, but those drops of rain left them totally unfazed as they powered to a gold medal and the title.

The silver went to the 30-year old Spaniard Manuel Dominguez Bernal on Ecamillo, the bronze to 37-year old Polish Beata Stremler on For Magic.

The class was excellently judged by Adriaan Hamoen (NED), Maria Colliander (FIN), Jean-Michel Roudier (FRA) and Peter Storr (GBR) with the latter judge providing the public commentary at the end of each ride. Storr's remarks were spot on, especially when it came to pinpointing the problems areas of the horses and addressing the harmony in each pair.

Fry and Gert-Jan van Olst's KWPN licensed stallion Kjento (by Negro x Jazz) were the last combination to go and the hot favourites for the title coming from a clear preliminary test victory with 9.4 on Wednesday.

In the Finals Kjento showed massive trot work with amazing ground cover and push in the medium trots. He showed very little difference between medium and extended, all three diagonals seemed full throttle. The horse displayed so much power and cadence, never losing the rhythm in the turns or lateral movements. In the half pass right his rider was almost standing in the stirrups though to bolster that power. The extended walk had good relaxation although he does not have the biggest freedom in the shoulder, but the rhythm was clear. The medium walk was rather short and not as supple through the body with some short-long steps in front, but the turns on the haunches were small. The canter was mega scopey and off the ground, with so much energy and power from behind. The flying changes were mega. At times Kjento got a bit strong in the contact, but Fry handled it gracefully and had him really steady in the head-neck position. The audience could not control its excitement and already started clapping when Fry rode onto the final centerline, making her horse spook for a second, but he was back with her in an instant and produced a good end halt.

The judges shared in their enthusiasm with the crowds. Storr spoke of "stunning balance in the medium and extended trot," the walk was "regular but could have more ground cover, more suppleness in the body," and in canter they saw "wonderful flying changes" that were "on the aids". They praised Kjento for being "happy, he shows off, never falters. It was the crowds' fault for that bit of tension at the end," Storr joked in conclusion.

Bred by Jorg van Os, Kjento scored 8 for walk and 10s for trot, canter, submission and general impression. He totaled 9.60 points for the world champion's title. Fry burst out in tears as she left the arena.

At the press conference, the 25-year old explained that "to produce what he has done today is the most incredible feeling. When those 10s came up, it took me a little by surprise. I know he's amazing but now everyone else thinks he's too. He does not have much experience with such crowds."

When asked to compare Kjento to her Olympic ride Everdale and how she prepared for Verden after Tokyo, Fry replied, "Kjento has just as much power. He has an easy time with some stretching and lunging (when Fry was at the Olympics). He was ready to go when I got back."

Spaniard Manuel Dominguez Bernal is walking in the footsteps of trailblazer Severo Jurado Lopez who was the first rider for Spain to bring home a WCYH medal. Severo got triple gold in 2015 - 2017 and now Dominguez bagged his first silver medal at his first ever international dressage competition, straight away a World Championships.

Dominguez and Kimberly Davies-Slous' Rhinelander stallion Escamillo (by Escolar x Rohdiamant) were the runners-up in the preliminary test and recaptured that second place today in the Finals. The bay stallion was a bit hurried in the trot lengthenings with the hindlegs coming out and he got a bit deep, but showed good ability to lengthen the stride and he held the cadence in the lateral movements. In the right volte he slightly came against the hand, but Dominguez kept a steady and quiet contact. The extended walk had very good overtrack and a 4-beat rhythm, the left walk pirouette was outstanding. The first and fourth flying changes were the best, in the right counter canter the horse got a bit downhill, but in the left one the self carriage was very good. Despite some screaming in the test, Escamillo kept his focus on the rider and obediently executed what was asked of him.

The judges described the pair as "a very good horse with super good riding." The trot was "nicely balanced and elastic, but there could be a little more engagement in the extensions." The walk was "clear with ground cover" and the canter was "beautifully ridden." They rewarded the horse, bred at Gestut Tenterhof, with a 9.5 for walk, 9.2 for trot, 9 for canter, and 9.5 for submission and perspective, totalling 93.40 points for silver.

Originally from Chipiona near Cadiz, Dominguez relocated to Germany in 2016 when he began working at Hof Kasselmann in Hagen. In 2018 he moved to Helen Langehanenberg's stable, where occasionally he got to ride Escamillo. The American owned stallion moved from Isabell Werth's barn to Helen's in January 2020. While Manuel said he has been riding the stallion for the past year and a half, he got the permanent ride on the horse in April 2021 when Helen needed more time to dedicate to her Olympic preparation for Tokyo and the "stalliony" stallion clicked well with Manuel.

The Championship rookie looked a bit dumbstruck by what had just happened today. At the press conference he said, "he's an amazing horse. I thank Kim for the opportunity to ride him. It's great working with Helen." Owner Davies-Slous confirmed to Eurodressage that Escamillo has not been sold as these rumours were floating around Verden. Dominguez added that he and Helen "will have a talk in a few days" about the plans for 2022.

Magical Bronze for Stremler and For Magic

The bronze medal went to German based Polish rider Beata Stremler aboard her sponsor Sylwia Ruta's For Magic Equesta (by For Romance x A Jungle Prince), bred by Friedhelm Kühnen.

Stremler, who made her international come back after a five year break from CDI showing in the spring of 2021 with new horses owned by Ruta, has a promising horse for the future in the tall liver chestnut gelding For Magic. The trot was lightfooted and cadenced with good balance in the lateral movements, although the bending to the right could be better. The extended walk had good activity, but the gelding could have stretched a bit more into the contact. In the medium walk he got a bit tense before the right turn on the haunches. The flying changes to the right were particularly good, the ones to the left were correct but still a bit laboured. The horse has a very functional canter that can adjust easily between extension and collection. In the counter canter he lost some suppleness in the back. Stremler beautifully presented the horse and seemed very pleased with her test.

The judges praised For Magic for his "natural balance in trot and the clear ability to collect in walk." About the canter Storr said that For Magic "was not always accepting the contact and could have stayed a little more supple in the topline."

The horse scored 9 for walk and trot, 8 for canter, 8.2 for submission an 9 for perspective to finish third with 86.40 points.

At the press conference, Stremler described For Magic as having "the whole package. He is so kind and sensitive. He feels a bit like magic. He has so much rhythm and elasticity and gives me such a great feeling." Beata also acknowledged the owner, Sylwia Ruta. "She's the best owner I can imagine. She buys some horses and supports me. I hope to go forward from here."

Stremler trains with Holga Finken. When asked what her expectations were for this show, she frankly admitted, "my goal was not to do a bad job. That was my plan."

Swiss Andrina Suter never expected that she would finish fourth at the 2021 WCYH. At least that is what her face seemed to say. The 29-year old former Under 25 Grand Prix rider, who is trained by Jurgen Koschel, landed just off the podium after a test in which the rideability and wonderful training of her horse were praised.

Suter entered the arena with Robert Lualdi's Westfalian gelding Briatore (by Belissimo M x Dresemann) as fifth pair to go in the class. The bright bay gelding, bred by Adolf-Theo Schurf, is certainly not the flashiest and most elastic mover, but always had his ears forward, was willing to go, up in the frame and soft in the contact. The medium and extended trots were cadenced, the half passes very well executed. The extended walk had two hooves overtrack and the walk pirouettes were lovely. The gelding was on the aids and beautifully performed the canter movements with straight flying changes. Overall he could be a bit more elastic and uphill, but it was such an effortless, harmonious test.

The pair was rewarded with 8 for walk, 8.5 for trot and canter, 9 for submission and 8.8 for perspective. They finished fourth with 85.60 points.

The dark bay mare has a very regular and rhythmical trot with a super constant flow in the lateral movements. She was soft in the contact although a bit dry in her mouth. The walk was clear 4-beat but the left turn on the haunches executed a bit big. In the canter her back could swing a bit more as she got a bit stiff in the topline in the right extension, but the flying changes were superb, probably the best of the day alongside Kjento's. Koko Jr's hindleg always reached under the body.

The young pair scored 8.8 for walk and trot, 8 for canter, 8.5 for submission and perspective to finish fifth with 85.20 points.

Eurodressage is all week in Verden taking photos of all WCYH riders. If you are interested in using out photos for social media or prints, send us an email FIRST.