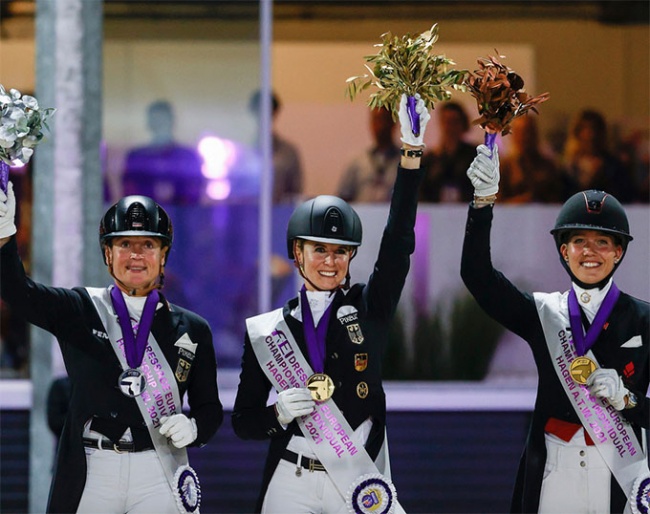 "I haven't quite realised it yet," mused Jessica von Bredow-Werndl (Aubenhausen). In less than two months the 35-year-old dressage rider has won her fourth gold medal at a championship. After winning team gold at the 2021 European Dressage Championship, she followed it up with European Championship gold in the Grand Prix Special at Hof Kasselmann with her 14-year-old Trakehner mare TSF Dalera BB (84.27%).

Silver went to Isabell Werth (Rheinberg) and Weihegold OLD (81.70) and bronze to Cathrine Dufour from Denmark with Bohemian (81.07).

In Front of the Crowds

The difference to Tokyo was the audience, which eagerly followed the European Championships decision of the 30 competing pairs under floodlight on Thursday evening. "For me it was a huge difference because Dalera came into the stadium, pricked her ears and got bigger and bigger. She really enjoyed it."

Isabell Werth (Rheinberg) found only words of gratitude for her 15-year-old mare Weihegold. "We didn't have any mistakes today for a start, but I have to say she gave me a lift. In the Grand Prix we took controlled risks, because it was all about the team. Today we were able to try the maximum and we were both very focused. I am very happy how she did it." The dressage rider did not get much sleep after her mare Bella Rose had to be operated on due to colic and is now on the road to recovery. Werth: "I am happiest about that."

Beaming with joy, Cathrine Dufour received her second bronze medal.  The 29-year-old Danish rider openly admitted that she, like her team colleagues, had already fought for a medal at the Olympic Games and unfortunately missed out. "Bohemian made me feel like we were both dancing and showed one of his best tests," said Dufour. The entire Danish team rejoiced with the rider. "We did a lot of team building and I really think that makes a difference. The more we push each other, the better the atmosphere is in the team, the better we become. We are fighting with each other and not against each other."

Left without a precious medal were Britain's Charlotte Dujardin, who finished fourth with her chestnut gelding Gio, Charlotte Fry with Everdale and Carl Hester and En Vogue in fifth and sixth place.

Karl-Theodor zu Guttenberg, Honorary President of the European Championships at Hof Kasselmann, clearly expressed his enthusiasm: "It felt like Saturday evening - the atmosphere, the audience, the sport. I am very proud of the organisers of the event who made it possible." The feeling of "being back", of experiencing a fantastic evening together, had captured everyone, he said.

This can continue to unfold at Hof Kasselmann in the coming days. On Friday the individual decision in the European Dressage Championships for the U25 generation will begin, on Saturday the European Championships medals in the Grand Prix Freestyle will be at stake and also the qualification for the BEMER Riders Tour of the show jumpers, which will experience its fifth round in Hagen a.T.W.. On Sunday the last European Dressage medals will be awarded this year and the Grand Prix, presented by BEMER Int. AG, will decide who will take away the most points from Hof Kasselmann in the BEMER Riders Tour.