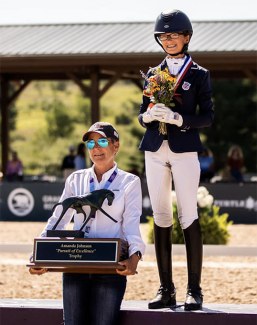 This trophy, which is on permanent display in the Roemer Foundation/USDF Hall of Fame, is awarded to the Junior rider who earns the highest combined average score in the three dressage tests: FEI Young Rider Team, Individual, and Freestyle.

Lexie Kment placed third in the team competition, first in the individual competition, and first in her freestyle test, with scores of 67.394%, 69.235%, and 74.775% respectively, securing the win with an overall combined average of 70.468%.

Having been involved with USDF for over ten years, as a member of multiple committees and councils and as a participant in many youth programs, she was the inspiration behind the push to create the original Brentina Cup. Amanda was also an inspiration to her students, many of whom she coached to regional championships from Training Level through FEI, and some of whom went on to earn their USDF medals. Amanda, with her infectious smile and laughter, carried on the tradition of encouraging her students to seek knowledge, work hard, and pay it forward.

“Presenting the inaugural Amanda Johnson ‘Pursuit of Excellence' Trophy was quite an emotional moment for me. Amanda was our student when she represented Region 4 at three NAYRC competitions, as well as when she went down her first Grand Prix centerline. I sewed her buttons on and dried her tears when she missed her tempi changes. Amanda Johnson epitomizes the values of what this program is all about. Not just the hard work and dedication, but the horsemanship and the sportsmanship. With Junior Riders now competing for the ‘Amanda Johnson' trophy, her legacy is sure to not be forgotten. Maybe it is no coincidence that the inaugural winner is from Region 4. Perhaps Mandy was whispering in Lexi's ear." stated Roberta Williams, USDF FEI Jr/YR Committee Chair.

American Grand Prix rider Amanda Johnson lost her battle against cancer on 2 December 2018. She was 37 years old. In her honour, her familiy established the Amanda Johnson Dressage Memorial Fund, a dressage sponsorship/scholarship in her memory to continue to support Mandy’s love for dressage. I