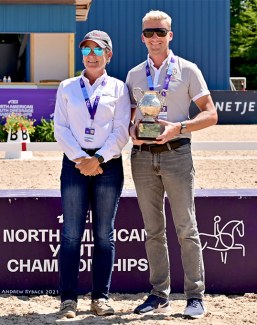 The Albers Award is named in honor of long time USDF Region 1 Chef d'Equipe, supporter, and good friend, Patsy Albers. The award is presented annually at the USDF North American Youth Dressage Championships, to the dressage chef d'equipe who best demonstrates the same level of dedication, enthusiasm, and team spirit shown by Patsy, throughout the years.

The award is open to all the dressage chefs d'equipe, and any competitor or chef d'equipe can nominate a candidate by submitting a written explanation as to why that chef deserves to win the Albers Award.

“Benny's calm, quiet demeanor was the perfect foil to the challenges that Mother Nature unleashed on competitors at this year's NAYC. Benny dealt with each curve ball, keeping the best interest of his team in front of him and that is what makes a great chef,” stated Roberta Williams, USDF FEI Jr/YR Committee Chair.