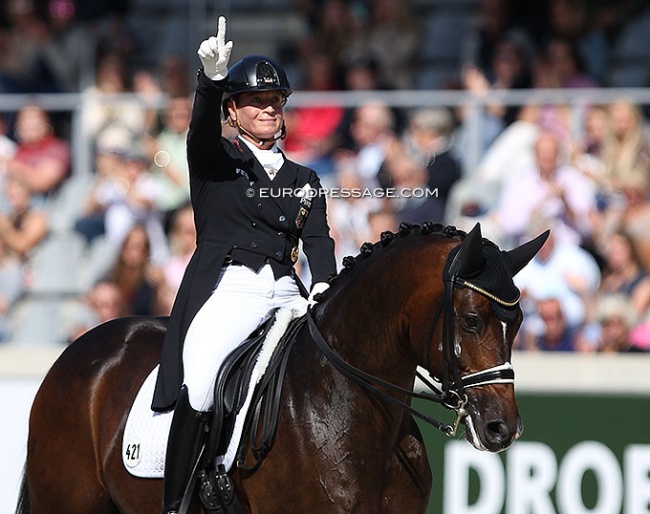 Germany's "Queen of Dressage" proved her mettle and battled her way back to the top of the board in the concluding class of the 2021 CDIO Aachen on Sunday 19 September 2021, the 5* Grand Prix Kur to Music.

While Werth won the "Deutsche Bank" 5* freestyle for the 14th time in her career on six different horses, it was Dutch shooting star Dinja van Liere who became the 2021 Aachen Grand Champion.

A very unique edition of the CHIO Aachen, the most prestigious international equestrian competition of the year, took place in 2021.

Due to the ongoing corona pandemic the organizers were only allowed to sell tickets to 30% of its full capacity, although the local authorities increased that amount to 50% at the start of the week.

In 2020 the CHIO was initially postponed to the month of September and then eventually called off, the first time a CHIO Aachen ever got cancelled since 1898 (!), although no shows were held during World War II.

Although the stadiums were not packed to the roof, the roars still resonated in the arenas after a clear jumping round or a finished dressage test, providing plenty of opportunity for goosebumps and this special electric atmosphere that only Aachen or a major Championship can bring about.

This year the CDIO Nations' Cup in Aachen did not follow its traditional Championship format (the 30 best riders from the Grand Prix move to the Special and the 18 best from the Special move to the Freestyle), but instead followed the ever-changing, non-sensical Nations' cup format that is applied at some, not all, CDIO competitions

From the riders competing in the CDIO 5* Grand Prix, two of them moved on to Saturday's Grand Prix Special and two to Sunday's Kur.  All three rounds count for the team classification. The rankings the riders achieved in these classes are converted into points (first place = 1 point, etc.). The team with the lowest points wins. In addition to the Grand Prix, only the top three rankings from the Special and the Freestyle count. Yup !

To add more to the confusion, the scoring office decided to present some riddles on the Sunday score boards with the letters DOD (Degree of Difficulty) and then some domino blocks which either stayed green, turned grey or went red. Not a single spectator understood what that was for and it let to questions from bewildered people approaching the press, "do you know what that was?" My head is shaking in a disapproving, horizontal way.

There was a period (2009 - 2010) when the score board was actually doing its proper job and educating and entertaining the crowds: the time when the individual marks of the judges were shown per movement, and not the average score !!! This led to "oohs" and "ahs" from the spectators and brought real emotion to the sport. I am clueless why we don't go back to a system that proved to be amazing and had X-factor, for the otherwise boring sport of "dry-sage".

I'm gobsmacked why "they" (whoever that may be, although I heard it was by request of the judges) decided to no longer show the individual scores. And no, I don't want to be looking at my phone for individual marks, while watching dressage ! I want to look at the horse and rider and with a quick glance of my eye see the score on the big board in front of me.

The lack of consistent training over the summer showed in the Grand Prix and Werth had her hands full piloting Madeleine Winter-Schulze and Victoria Max-Theurer's 11-year old Brandenburg stallion Quantaz (by Quaterback x Hohenstein) through the Grand Prix test. An explosion in the one tempi changes reduced their score to 76.130% and a fourth place.

However, Werth is not the most decorated dressage rider of all times for no reason and she ironed out the creases on Sunday for the freestyle. I was secretly hoping that she would use her David Bowie freestyle for Quantaz, but it was back to the good-old "Land of Hope & Glory / Queen" remix as her choice of music. Isabell had the advantage of entering the arena as last to go and pulled out all the stops. The horse was still not 100% submissive in the bridle, but Werth solved it well. The walk was still a weak point although the judges appear puzzled what to score it. The collected scored between 5.5 and 7.0, the extended walk between 6.0 and 8.0.  The half passes and extensions were well ridden, the passage had a nice bounce and the horse seemed comfortable in the piaffe pirouettes. The test had a very high degree of technical difficulty which the young Quantaz coped with well today. Werth had a score of 86.740% to beat and the crowd erupted when a winning 88.335% flashed on the board.

“I felt really inspired when I entered the arena. It is something very special to ride in this stadium to compete in this atmosphere," she said after winning the Kur. “I think Quantaz really showed what is possible today and how much potential he has. I am very proud. I didn’t mind on Friday. I prefer having a horse that is a bit sharp and willing to go. Okay, it was a little too much, but today he was very focused and concentrated."

While Isabell Werth bagged no less than 43,000 euro in prize money by winning the Grand Prix freestyle, Dutch Dinja van Liere became the Aachen Grand Champion as her two 5* tour scores combined made her the highest scoring rider of the show.

Van Liere and Joop van Uytert's KWPN stallion Hermes (by Easy Game x Flemmingh) were the shooting starrs of the 2021 CDIO Aachen although this did not come as a surprise. The combination made a stellar performance at the Dutch Olympic selection trials but missed out on competing at the Tokyo Olympics because his ownership paperwork was not verified and in order by the FEI's January 15 deadline earlier in the year. Hermes was spared from going to the 2021 European Championships and saved to make a bang at Aachen.

Trained by Dutch reining coach Rieky Young, Dinja and the just 9-year old Hermes were on peak performance in Aachen. Although their music was light and atmospheric, it stayed a bit non-descript and did not tell a story. Nevertheless the pair produced a fantastic ride in which the horse shows wonderful piaffe-passage work, is light in the bridle and on the aids at all times. They rode a wonderful test and will be the ones to watch next year for the 2022 World Championships. They posted a personal best of 86.740%.

“If anyone had told me I’d be sitting here next to Isabell Werth today, I would have said they were crazy,” said the 31-year old Van Liere who only made her international break through at Grand Prix level this year. Her career has so far focused on training and competing young horses She is following in the footsteps of Dutch team riders Hans Peter Minderhoud and Emmelie Scholtens' whose careers also started in year-long professional riding of youngsters before stepping up to Grand Prix.

For Dinja, her weekend in Aachen was very lucrative. She won 7,800 euro prize money in the 5* Grand Prix, 26,000 euro in the 5* Kur and by becoming Aachen Grand Champion she put an additional 15,000 euro into her wallet, totalling 48,800 euro. This is of course peanuts compared to the 330,000 euro that the show jumping Grand Prix winner Daniel Deusser won on Killer queen in a single class, the Rolex Grand Prix on Sunday. Ah and Deusser also earned 12,000 euro for finishing 6th (!!) with the German team in the Jumping Nations' Cup. The winning jumping team (USA) won 250,000 euro in prize money.

The 25-year old Charlotte Fry is always good for current, poppy musical freestyles that get the bloodflow pumping! Her kur to music by Jason Derulo, Sia and David Guetta (Let me Take You Dancing, Call Me Senorita, Flames) was upbeat and fun and highlight the unstoppable energy of Gert-Jan van Olst's 13-year old KWPN gelding Dark Legend (by Zucchero x Tango).

The long legged and long-lined black gelding produced his best piaffe work of the week, although he could lower the croup more, the tempi changes are dead straight but often very tense and the horse did not properly relax in the extended walk (6.5 - 7.5). He was not immobile in the halt at entry (6.0 - 7.0), but stood still in the final halt. Fry rides this horse with nice length in the neck, the trot half passes were gorgeous and especially the right pirouettes worked well.  With a degree of difficulty up to 9.7 points, she ended up on a score of 83.675% for third place.

"All three horses stand next to each other in the barn and compete against each other to top the stable rankings," said Fry with a wink.

Swedish Patrik Kittel got a very welcome gift from Danish horse dealer Andreas Helgstrand when he asked the Swede to continue the training of the  the 11-year old Danish warmblood Fiontini (by Fassbinder x Romanov). Kittel's top ride Well Done de la Roche missed out on the Olympics due to an untimely injury in Tokyo, while Delaunay is being saved for the World Cup season, Bonamour sold and Forever Young HRH is just at the beginning of her Grand Prix career.

Kittel and Fiontini gelled immediately. Thanks to three exceptional paces, Fiontini scores well on the extended walk, trot and canter. Riding to music from the movie Thor, the pair brought plenty of drama to the arena. Unfortunately the mare was very strong in the contact and gaped while flashing the tongue. This was not really reflected in the points (8.5 - 9 for harmony). However, the passage is very powerful and off the ground, the trot half passes ground covering. A mistake in the two tempi changes pushed the score down to 83.410% and a fourth placed in their Aachen debut.

German Frederic Wandres and Hof Kasselmann's 14-year old Hanoverian Duke of Britain (by Dimaggio x Rubinstein) landed fifth place with 82.07% Wandres' freestyle is a blast from the past with 1980s disco//dance hots such as Relax (Frankie goes to Hollywood), High Energy (Evelyn Thomas), and Shout to the Top (Style Council).  The chestnut gelding is secure in all the Grand Prix movements, produced good passage and piaffe works, confirmed pirouettes and they finished with a one-handed passage.

Team Germany ended up taking the Nations' Cup victory in the end, although it wasn't a certainty after day one when the highest ranked German in the 5* grand prix had placed fourth. The German team comprising of Isabell Werth/Quantaz, Jessica von Bredow-Werndl/Ferdinand BB, Frederic Wandres/Duke of Britain and Carina Scholz/Tarantino won the Lambertz Nations Cup on a total score of 22 points.

Frederic Wandres was overjoyed: “It has always been my childhood dream to be on a photo in the prize-giving together with Isabell. So, I am very proud today!”

The Dutch team landed second place with 40 points, while Great Britain was third on 47 points.

Next year the CHIO Aachen will be back on its usual dates, the first weekend of July, and hopefully open to take on a full capacity of spectators. It is expected that the CDIO Aachen will once again be the final team selection trial for many nations in the lead-up to the 2022 World Championships in Herning at the start of August.