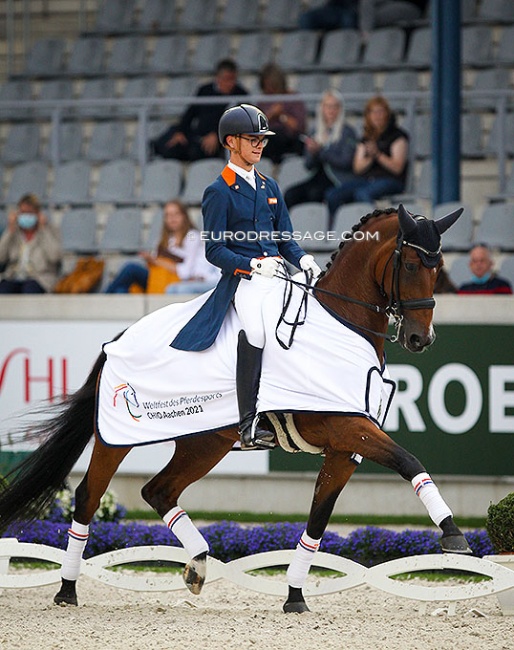 2021 European Young Riders' champion Marten Luiten concluded a stellar competition year with a double victory in the inaugural Young Riders' Tour held for the first time at the CDIO Aachen.

The young Dutchman rode Willeke Bos' KWPN mare Fynona to the highest scores in two rounds and received the Lieselott and Klaus Rheinberger Foundation prize as well as an invitation to join the CHIO Aachen Campus and get training from Isabell Werth.

With the postponement of the 2021 CDIO Aachen to September due to corona, the show organization dropped their traditional Under 25 tour, which they started in 2011, and replaced it with a Young Riders' tour, inviting 11 of Europe's highest scoring young riders from the 2021 European Young Riders Championships alongside one Canadian combination, Camille Carier Bergeron.

Two tests were scheduled for these twelve riders: the Individual test on Friday and the Kur to Music on Saturday.

After winning triple gold at the 2021 European Young Riders Championships in Oliva Nova, Spain, in July, Marten luiten and the 11-year old Fynona (by Ampere x Gribaldi) continued their winning streak in Aachen with stellar scores.

Luiten's Fynona is not the biggest mover and especially in trot the mare lacks elasticity and bounce, but Marten scores with his accuracy in riding, the steady bit contact and outstanding canter work. They won the individual test with 78.912%, a full four percent ahead of the second placed pair, and the freestyle with 82.350% just 2.5% ahead of the pack.

"It was very impressive to ride into such a stadium," said Luiten about the Deutsche Bank arena in Aachen. "It was a super experience for both me and my horse."

Danish Sara Aagaard Hyrm and her 15-year old Danish bred gelding Skovborgs Romadinov (by Romanov) were fourth in the individual with 74.294%, but pushed for power in the freestyle and rose to a second place with a 79.750% kur score.

"Can somebody pinch me? Is this a dream? Or am I just living the dream," Hyrm wondered on social media "I never imagined to ride in an arena with the most talented riders from the whole world in my age."

Incidentally, both the winner and the runner-up are among those talents that Isabell Werth as Dressage Head Coach has selected to participate in the Programme of Excellence in the scope of the CHIO Aachen Campus. They will visit the Soers at regular intervals over the coming 12 months to train with Isabell Werth, learn the essentials from veterinarians regarding injury prevention and the management of their horses, and receive tips from experts on their own physical and mental fitness.

Germany and Spain in Pursuit

In the individual test German Luca Collin and the 11-year old Hanoverian gelding Descolari (by Desperados x Weltmeyer) were third with 74.824%, but they dropped to 5th place in the freestyle with 77.450%. The fourth placed pair of the individual, Spanish Sergio Moron Basoco and his 11-year old Dutch bred Farnham L (by Furst Rousseau) climbed up to third place in the Kur with 79.225%.

Dutch Thalia Rockx and her homebred 10-year old Golden Dancer de la Fazenda (by Bretton Woods x Florstan) were second in the individual test with 74.853% and ended fourth in the freestyle with 78.675%

Eurodressage was in Aachen and took photos of the riders. If you are interested in using out photos for social media or prints, send us an email FIRST.