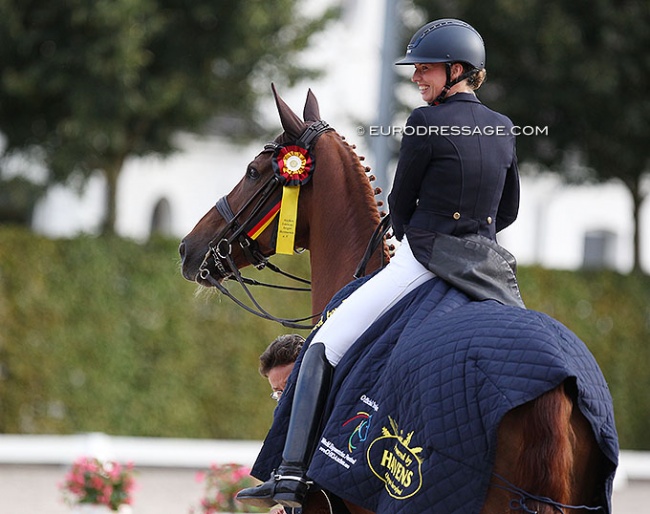 Fabienne Müller-Lutkemeier and her rising star Valesco did the double at the 2021 CDIO Aachen claiming two victories in the 4* big tour classes which ran parallel to the CDIO Nations' Cup tour.

Six years after last representing Germany as a member of the senior dressage team,  Müller-Lutkemeier finally seems to have a horse again that can put her back in the race for the highest glory.

Formula 1 Horse for Fabienne, A Star is Born

Fabienne had her heydays on D'Agostino (by De Niro x Shogun xx) with whom she competed on the German team at the 2013 European Championships in Herning and 2014 World Equestrian Games in Caen. They also rode at the 2015 and 2016 World Cup Finals.  Although many other lovely Grand Prix horses followed - Diamonds Forever, Sole Mio, Fabregaz, Qui Vincit Dynamis, Fiero, Fats Domino and Flynn PCH - in the final show years and after the retirement of D'Agostino, none of them were able to really give her access to one of four coveted German team slots. But this might change in the near future!

Fabienne's new star is Valesco, a 10-year old Westfalian gelding by Vitalis x Douceur which arrived in her barn as a 3-year old, is a mega horse! The liver chestnut gelding has three very good basic gaits and incredible talent in piaffe and passage. All the ingredients for greatness are there and she gave a little taste of that in Aachen.

“Unbelievable! I am speechless," gushed Lutkemeier after her second victory. "That is only his second ever Special, but he was so fantastic. He was really nervous, but he simply trusted me. And I am so thankful to him. Yes, it really is amazing! Really!"  The chestnut always gives it his all and that is why he has been nick-named "Schumi" after F1 race car driver Michael Schumacher.

British Charlotte Fry is in the luxury position of having no less than three Grand Prix horses to compete as of 2021. With Everdale she rode the Olympic and European Championships and with Dark Legend, her 2019 European Championship ride, she contested the CDIO 5* tour in Aachen. Fry also brought her rising star Glamourdale, a 10-year old KWPN stallion by Lord Leatherdale x Negro, to Aachen to show him the ropes in the 4* division.

Fry and Glamourdale were the 2018 World Young Horse Championships in the 7-year old division and they made their international Grand Prix debut at the 2021 CDI Hagen last April. At the small CDI Grote Brogel in Belgium in May, they won the Grand Prix and Kur with super scores and also in Aachen the black stallion confirmed his potential.

Missing some consistency in his training over the summer due to Lottie riding in Tokyo and Hagen, Glamourdale placed fifth in the Grand Prix with 73.043% and found his groove in the Special to place second with 77.170%

Danish Anna Kasprzak is in a similar situation as Fabienne Lutkemeier. After the retirement of her top Grand Prix horse Donnperignon, Kasprzak has also been in search of a successor that can put her back on the Danish team.

She acquired the now 13-year old Westfalian gelding Rock Star (by Rockwell x Weinberg) already back in 2015 and made her international Grand Prix debut on him back in 2017, but the horse struggled with injury and has not been able to consistently compete at CDI's. He did one in 2019, two in the spring of 2019 and returned to the CDI arena in June 2021 in Kronberg, where he finished 8th in the Grand Prix with 69.782%

In that time period Kasprzak of course also had two babies as well as rode other Grand Prix horses (Quarton, Addict de Massa and Fuhur), but none of them have so far been able to produce the big, promising scores like Rock Star just did in Aachen. The duo deservedly placed second in the Grand Prix with 73.935% and topped it up with a third place in the Special on 75.064%, a score that gives her new perspective on Danish team selection.

Eurodressage was in Aachen and took photos of the riders. If you are interested in using out photos for social media or prints, send us an email FIRST.