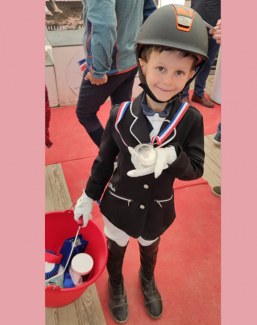 This week's guest post is written by David Stickland, who usually contributes score analyses of high performance dressage sport at international level. On this occasion he wanted to share his impression and respect for the sport at grass root level, zooming in on a regional dressage championship in France.

While several autumn CDI's are being cancelled due to lack of entries, the Auvergne-Rhône-Alpes regional championship celebrated 830 starters over the course of three days. It is a mammoth task to organize and manage such a big dressage show and Stickland was there as a helping hand.

A championship for all

Last weekend from 8-10 October the Regional Dressage championship for Auvergne-Rhône-Alpes took place at Chazey sur Ain, about 40km from Lyon. This championship has grown over the years and is now one of the biggest regional events in France with 830 starters from all dressage levels. The youngest competitor was just 7 years old and performed the first level pony test, where he came first out of the four young athletes! At the other end of the spectrum was the FEI Grand Prix and all levels in between had their own championships.

In France dressage is largely divided between what is known as the Club levels, where many of the riders will be competing on horses owned by riding clubs, through the Amateur levels where mostly horses are owned by the riders and cover the range up to the FEI Small Tour, and finally the Professional levels that start at the Small tour and go up to the Grand Prix.

The special thing about this event was bringing all those levels together at the same competition with a very real sense of community.

The regional championships used to move from site to site each year, but since 2011 they have taken place at Chazey-sur-Ain. This site has itself grown over the past 13 years and each autumn is home to the Equimasters CSO championships followed a few weeks later by the Equimasters Dressage championship. The Auvergne-Rhône-Alpes Dressage Commission, chaired by Gerard Medolago have gradually expanded the event so that now it is open to every dressage level in the French Equestrian Federation (FFE).

In the CLUB level there were 125 riders and 129 horses, while in the AMA/PRO levels another 253 riders and 275 horses. At the Grand Prix level there were 12 riders while at the CLUB2 level a total of 63 starters on the Sunday! This competition is entirely organized and put in place by volunteers drawn region-wide from the Dressage community.

For the past three years 5* International judge Jean-Michel Roudier has presided over the event along with his fellow 5* judge Bernard Maurel who joins him and 25 other national judges to ensure 3-5 judge panels for most levels.  Just the allocation of judges and secretaries on the 5 arenas with some 430 starts on Saturday is a mammoth task that is somehow carried out by two of our most experienced commission members and regional judges Marie-Claude Blan and Béatrice Mazoyer.

The judges may be the visible members of the team, but of course then there are secretaries, runners, parking and covid-pass managers, grounds staff, etc., etc., so that all in all a team of close to 100 volunteers make such an event possible. Special mention has to be made to the team of teenage students from the MFR of Mornand-en-Forez  in the Loire Department vocational school for equestrian sports who are led each year by their director Virginie Giraud; these youngsters, who have travelled 140km to get to Chazey, work so hard and with smiles and creativity for the 5 days (2 preparation and 3 competition), all the while practicing their English skills with “Davide” (this author), they are such a pleasure to work with.

Of course, sponsoring of such an event is crucial and along with the support of the Comité Régional d’Equitation more than 40 other sponsors, brought together by Sophie Rosset, make this event possible.

Special mention for Stubben saddles that sponsor a year-round cumulative competition that culminates with a prize giving at Chazey and even in this Covid year had 355 combinations participating to it!

All in all, an exhausting but totally satisfying labor of love for the organization and a beautiful celebration of our community of dressage that unites and fires up riders who all want to do the best they can at the sport they love. At events like this, everyone is a winner.