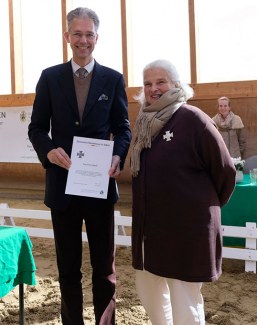 After 13 years on the job, Britta Bando will step down as the German para dressage team chef d'equipe.

The 66-year old Bando captained the German para team riders to 62 medals achieved at the Paralympics, World and European Championships. Sixteen of those were gold, 22 were silver and 24 were bronze.

The Hamburg based Bando has also been bestowed with the German Riders Cross in silver for her lifetime achievements to promote equestrian sport as chef d'equipe.

Bando's career as team captain started at the 2008 Paralympics in Hong Kong. She rode herself up to S-level and 31 years ago became a national judge. Over the years she worked and qualified to judge up to Grand Prix level. Since 2006 Bando is an FEI Para dressage judge and as of 2014 she also works a FEI steward in dressage and show jumping.

In 2013 Bando became member of the DOKR Para equestrian board and will be the chair of it after her retirement as para team chef d'equipe.