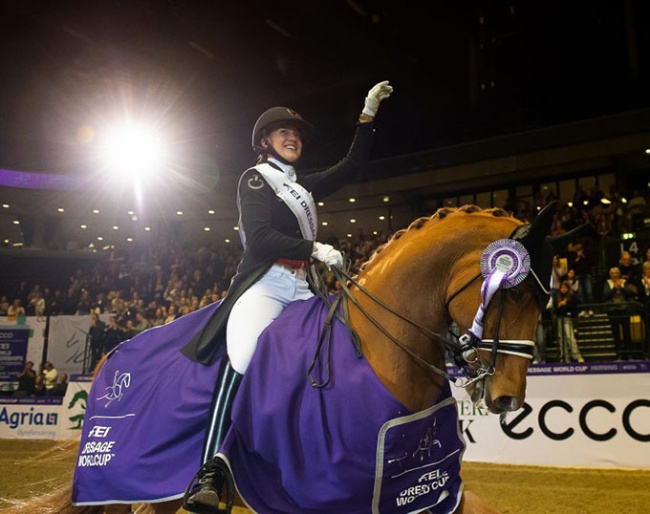 They were billed as the superstars that everyone wanted to see, and tonight the brilliant Danish partnership of Cathrine Dufour and Atterupgaards Cassidy didn’t disappoint. In a field sprinkled with both blossoming and established talent they reigned supreme to win the exciting first leg of the FEI Dressage World Cup 2021/2022 Western European League on home ground at Herning.

They had to work hard, however, because compatriots Carina Cassøe Krüth and Heiline’s Danciera put on a spectacular performance to finish second, while the Dutch duo of Dinja van Liere and Hermes were sensational when slotting into third.

Young horses were really impressive tonight, showing so much promise for things to come. But the crowd went wild when the old boy of the pack, the 18-year-old Cassidy, showed that he still has all the moves when stealing the limelight.

The action opened with Jennie Larson and Zircoon Spring Flower, the sole Swedish representatives when Patrik Kittel was withdrawn as his ride, Fiontini, was sold.

It was German eventing idol, Ingrid Klimke, who led the way at the halfway stage however when posting 78.750 with Franziskus 15. And when the action resumed after the break, Denmark’s Lone Bang Larsen went out in front with a lovely test from the 11-year-old mare Thranegaardens Rostov that earned 79.525. But then Van Liere and her fabulous nine-year-old stallion Hermes, who took the sport by storm when winning the Grand Prix in Aachen (GER) last month, forged a massive lead when putting 84.360 on the board.

With three left to go then Cassøe Krüth bettered that with a beautiful Freestyle from her 10-year-old mare that, despite a mistake in the one-tempi changes, earned a massive 86.395. So, second-last to go, Dufour and Cassidy had to do something special. But they’ve done it many times during their many years together and tonight was no exception. Posting 87.115 they bagged victory and brought the Danish crowd to their feet.

“I was crying my heart out, it was really fantastic!”, said Dufour afterwards. With her younger horse, the 11-year-old Bohemian, she earned silver and bronze at the 2021 European Dressage Championships last month, not long after returning from the Tokyo 2020 Olympic Games. But achieving what she did tonight with Atterupgaards Cassidy who carried her to the Rio 2016 Olympic Games and who has collected 12 European Championship medals, including Double Young Rider gold and double-bronze at Senior level, during their hugely successful career together was just so very special.

It’s about 18 months since he last appeared at an international event, but tonight he showed he still loves every moment of it.

“I mean he is turning 19 in one month and he’s just one of a kind. He’s been with me for 11 years and I have really had enough, but he hasn’t yet! I brought him here so that he could feel important again and he could show the crowd that he still wants to do it, so I’m over the moon!”, Dufour said.

Yesterday he already made it clear he’s still very much in the game when winning the Grand Prix. And tonight he posted his Freestyle victory with apparently effortless ease.

Dufour says the horse she calls “Cassie”, keeps himself fit. “You don’t have to do too much at home. I ride him once, maybe twice a week in dressage and the other days he’s just stretching and jogging or doing pole-work or hacking, so I think that’s why he’s so super healthy.

"He’s just clever, he’s never using himself too much, he gives that much extra in the competitions but back home I never ask for that. I just keep my fingers crossed when I bring him out and hope that he will do it, and he shows me again and again that he will," said Dufour.

And she insisted that she came out tonight with no huge expectations. “I said at the beginning of this competition that there was no pressure, I wasn’t going to ride to win. I didn’t want to push Cassie to win, everything he offered me I took, but I wouldn’t have pushed him to do any more than he wanted”, she said. And will this be his last public appearance before going into well-earned retirement? Possibly not, it seems.

“We’ll see what this season brings and I might do one more show with him, but he will be the one who decides, not me!”, said the 29-year-old Dane who will take another horse, Vamos Amigos, to the second leg of the FEI Dressage World Cup™ Western European League at Lyon, France next week.

The Danish crowd had plenty to cheer about tonight, and for runner-up Cassøe Krüth it was an extra test for her 10-year-old mare when they clapped loudly as the pair progressed up the final centreline. But Danciera seemed to enjoy it “and she has never felt so good!”, said the 37-year-old Dane tonight.

“When they started clapping I thought Ohh, we still have a long way to go! But she stayed focused and it was ok and actually I think she liked it, so now they can do it any time!”, she added.

Dutch 31-year-old Van Liere was delighted with her result with Hermes. “Yesterday we had a couple of mistakes but it was our first Short Grand Prix and of course he still lacks experience. I’m riding him since he was three years old and I hope I will be able to ride him for many more years. I plan to do more World Cups but I don’t want to put too much pressure on him because he is still young," said the athlete who hopes to bring him to the qualifiers on her home turf in Amsterdam in January and ’s-Hertogenbosch next March.

It’s a short countdown to the next leg of the series in Lyon where the Grand Prix will take place on Thursday 28 and the Freestyle will kick off at 16.00 local time on Friday 29 October.