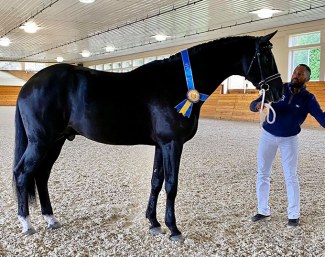 Cum Laude is by the Grand Prix superstar Apache, Preferent, who competed at some of the biggest venues in the world, including Aachen, Rotterdam and the World Equestrian Games with Emmelie Scholtens. The pair finished 8th in the freestyle at the World Cup Finals in Göteborg with an 80.782%. Apache was recognized for his superior movement, particularly the use of his hind leg. Apache is the sire of six Approved stallions and the grandsire of three Approved stallions. Apache’s daughters are equally spectacular, with 71% receiving a Star predicate or higher. Apache has numerous Grand Prix offspring, including Gio ridden by Charlotte Dujardin who won a team bronze medal and finished fourth individually at the Tokyo Olympics.