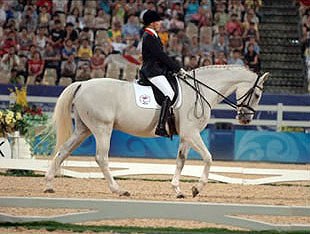 The para dressage world has lost one its leading lights in Lambrusco III who was put to sleep on Monday 1 November 2021 at the age of 28.

A former ride of British Paralympian Sophie Christiansen, Lambrusco not only launched careers and brought national pride but touched the hearts of many.

With Sophie Christiansen, who was just 20 at the time, Lambrusco (by Uniform x Plesman) represented Great Britain at the 2008 Beijing Paralympic Games winning team and freestyle gold medals and an individual silver. Sophie had already tasted Paralympic success with a bronze medal in Athens; however, it was Lambrusco who helped her achieve her gold medal goal for the very first time.

Though we recall Lambrusco’s medal success, this is not the only aspect of his great legacy. Together with helping launch the careers of both Sophie Christiansen and Clive Milkins, who for almost 21 years was Stable Manager and Head Coach at South Bucks RDA, the intelligent and noble grey gelding was instrumental in the careers of numerous of the sport’s top riders as well as playing a magnificent role in therapeutic riding.

1993-born Lambrusco, by the ‘unfashionable’ stallion Uniform, was imported from the Netherlands to the UK as a youngster and subsequently trained and competed up to Prix St Georges level. In 2003 he was spotted and bought by the late Jane Goldsmith, co-founder of the Para Dressage Training Trust, which was set up to provide developing para athletes with suitable mounts until they’re able to obtain their own sponsorship.

Ridden for a short while by Deb Criddle, ‘Brusco’ later partnered Ricky Balshaw at the 2003 World Championships before Anne Dunham and subsequently the late Jo Pitt took over the reins. It was with Grade II rider Jo that he won his first championship medal – a silver – at the 2005 European Championships in Hungary.

Another pivotal moment in Brusco’s career was 19 January 2007, the day he became resident at South Buckinghamshire RDA. Under the tutelage of Clive Milkins, Grade Ib rider Rory Williams took over the reins and impressed at the 2007 World Championships at Hartpury. With one athlete in each grade riding for experience only, if Rory and Brusco had been allowed to compete they would have won gold.

After Hartpury, Rory’s profile changed resulting in the beginning of Brusco’s illustrious chapter with Sophie Christiansen. After joining forces in 2008, the duo received their call up for Hong Kong and 12 months on won team and individual gold at the 2009 FEI Para European Championships in Kristiansand, Norway.

Following Norway, Brusco retired from overseas internationals. He did however continue to fly the flag for Great Britain on home soil, competing at Millfield CPEDI with Mari Durward-Akhurst, Hartpury CPEDI with Susanna Wade and Bishop Burton CPEDI with Michael Murphy and Alex Sutton.

“If a horse could define para dressage, it would be Lambrusco,” says Sophie, paying tribute to her great friend. “Not only did he enable me to fulfil my lifelong dream, but he took many others to Championship level: Ricky Balshaw, Anne Dunham, Jo Pitt, Rory Williams and many others.

“But it was the riders he helped at a lower level which was truly astounding, taking even more to National Championships and internationals, including Mari Durward-Akhurst and Michael Murphy. He was a schoolmaster to countless others at South Bucks RDA and seeing riders’ eyes light up saying “I’ve just sat on a gold medallist,” was a joy to behold.

“There will never be another horse like him, and thank you just doesn’t seem enough for Clive Milkins and myself – he made our careers. A true unicorn.”

In recent years, Lambrusco continued to team up with many riders on a weekly basis at his South Bucks RDA home. His riders ranged from eight to 75 years old and he regularly did lead rein RDA sessions and private walk sessions with independent riders.

At the age of 25, he won the RDA Dressage Anywhere Grade I Championship with a 60-year-old stroke survivor and saw off competition from 27 other nominated horses to be named Riding for the Disabled (RDA) horse of the year at the annual RDA awards.

“There will never be another horse like Brusco, he will never be replaced,” says Clive, echoing the sentiments of Sophie. “He started my career, I travelled all over the world with him, and he was a schoolmaster who taught me how to care for an international horse properly.

“He was the ultimate professional. I don’t think he was easy as a youngster but from the moment he was a para horse, he got on with his job. He was a noble, regal horse and in any given situation, he simply assessed it and coped.

“A standout memory for me,” remembers Clive, “is his Lord of the Rings freestyle under the floodlights in Hong Kong (Beijing 2008). It was such a huge atmosphere yet he just glanced at me, said ‘I got this Dad!’ and kept on walking. From a team point of view and a coaching point of view, you knew he was going to produce. He was a horse that did the exact opposite of showing a rider’s weaknesses.

“He was the horse of a lifetime and a horse that touched the lives of so many people. Kids doing therapy sessions would go home saying, “I’ve ridden a Paralympic Champion!”. He will be remembered for the medals but also so much more.

“He only recently retired from therapeutic riding and was still being ridden until a couple of weeks ago,” continued Clive. “The care and support under Di Redfern at South Bucks RDA has been phenomenal."