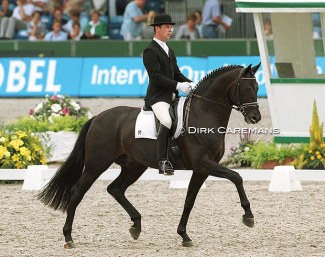 In the year that he passed away at age 28, Sandro Hit has finally been able to climb up to the number 1 spot on the WBFSH Dressage Sire Ranking. He moved from third place in 2020 to first place in 2021.

Sandro Hit was by Sandro Song out of a Ramino mare. He was bred by Reinhold Harder and owned by Paul Schockemöhle He has been in the Top 3 of the WBFSH Dressage Sire Rankings since 2016, but this is the first year he is ranked at the top.

As one of the most used dressage stallions on the planet until a late age, it was just a matter of time that his progeny would surface at the top with the black stallion having had access to the best brood mares in the masses, as well as his offspring trained by the leading dressage riders in the world.

The KWPN bred stallion Johnson (by Jazz x Flemmingh) captured second place on the 2021 WBFSH Dressage Sire Ranking, after topping the ranking in 2020.

KWPN foundation stallion Jazz (by Cocktail x Ulft) continues to dominate Grand Prix dressage horse breeding. He led the ranking in 2008, 2009 and 2010, and continued to be a dominating influence over the past decade.

Jazz' most successful offspring competing at the top, at the moment, is Carl Hester's En Vogue, and Jill Irving's Arthur.

"As the official and reliable source of verified rankings based on FEI performance data, the WBFSH Sire Rankings have long been the barometer of the global sport horse breeding industry," Eva-Maria Broomer of the WBFSH stated. "The rankings provide an invaluable resource to breeders in identifying breeding trends and sire lines who have proven themselves again and again in breeding the top performers in the sport."