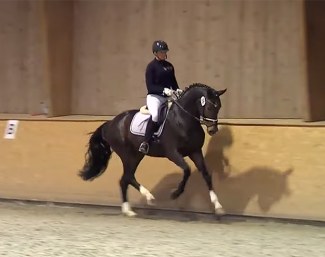 Segantini became the high scorer of the 50-day Stallion Performance Test which concluded in Adelheidsdorf on 26 November 2021.

Thirty-six stallions, mostly dressage bred, participated in the testing, which started on 8 October.

The Hanoverian bred Segantini (by Secret x Fidermark) scored a total of 9.50 points with 9.75 for dressage and 9.02 for show jumping. For his character he got 9.5, for willingness to perform a 10, for his walk 8.5 and for trot and canter 9. He further scored 9.5 for rideability and 7 for body use over the jump. He is bred by Christine Feichtinger and presented by Eckhard Wahlers. The dark bay is not to be confused with the eponymous Westfalian stallion Segantini (by Silbermond x Florestan) owned by Swiss Grand Prix rider Hans Staub.

The runner-up in the testing was the 3-year old Hanoverian bred and DSP licensed Blue Hors Florent (by Floriscount x Desperados), who finished on a total of 9.0 points with 8.75 for dressage and 8.65 for show jumping. He got 8 for walk, 8.5 for trot and 9 for character. He further scored 9 for rideability and 8.75 for character. This Hanoverian bred colt stands at stud at the Marbach state stud.

The 4-year old Belgian bred and Oldenburg registered stallion Rigoletto Ballante (by Revolution x Sir Donnerhall), owned by Stefaan van den Elsen, got 8.5 with 8.75 for dressage and 8.44 for show jumping.

Paul Schockemöhle's 3-year old Go For Romance PS (by Governor x Furst Romancier) got 8.5 for dressage and 8.10 for jumping, while De Bemi Hoeve's 3-year old KWPN stallion Next Level (by Desperado x Jazz) scored the second highest dressage score of 9.25 and got 8.15 for jumping.