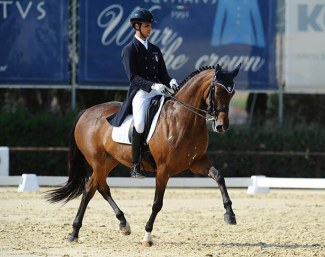 Karina was registered with the FEI as a "Italian Sport Horse" (MIPAAF) bred, but was in fact bred and born in Spain.

Tiozzo and his mother Maria Cristina Proietti bought the mare in Spain as a youngster.

The duo made its small tour debut in the summer of 2017 when she was still called Yuyuba. When they registered her for an FEI passport, Tiozzo decided to register her as Karina.

Their international show debut was in October 2018 at Grand Prix level. They first showed at the CDI Nice, where they posted 59.196%. Five months later they went to the 2019 CDI Ornago and improved that GP score to 66.217%.

In the 2020 corona breakout year the pair did not compete internationally, but returned to the CDI ring in June 2021 at Ornago, followed by Crozet in August, and Ornago again in October.

The pair was still growing and looking forward to the future but their journey was cut short on 29 November. Karina suddenly passed suddenly and quickly in her stall from a suspected aortic rupture.

"I cared very deeply for her and now she's gone," Tiozzo told Eurodressage, who added that a necropsy will be carried out to find out the exact cause of death. The vets hypothesize that it was a heart attack or an aneurysm."

He also stated, "she was my companion on an unforgettable adventure. We shared many moments together since we met. She was very young and we grew up together so to speak. She gave me so much joy."