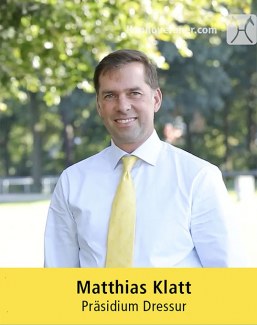 Matthias Klatt will suspend his activities as a Hanoverian breed show judge following an inquest into bias at the 2021 Hanoverian Elite Mare Show in Verden.

Living Up to New Guidelines

The Hanoverian society went through a board crisis in 2019 which led to the firing of Dr. Wolfgang Schade as breeding and general director.

The board restructured to become a team more closely connected to the wishes of the breeders, more transparent in its management to be less influenced or affected by business relationships, influence, and bias.

In the words of the Hanoverian society, "In the past years, weak points regarding transparency and possible bias have been criticized in various divisions by discrete hints as well as in open discussions. Consequently, this resulted in the introduction of a Good Governance Guideline with last year's structural reform."

The new structure created guidelines for good governance and is now adamant to uphold them.

"The guideline identifies misconduct, biases, relationships between individuals, and much more, and also sets out appropriate procedures for avoiding such cases," said the Hanoverian society. "An important concern since the last Board election is that the contents of the Good Governance Guideline are acknowledged and that compliance with the Guideline is adhered to in the interests of improving transparency."

At the 2021 Hanoverian Elite Mare Show on 23 August 2021, aka Herwart von der Decken show, "a gross violation of the Good Governance Guideline has occurred."

The judging panel at the show included Hergen Forkert, Matthias Klatt, Hanoverian breeding director Ulrich Hahne, and guest judge Johan Hamminga from the Netherlands. The grand champion of the show was Va Pensiera  (by Vitalis x Furstenball), who is bred and owned by Almut and Karl-Heinz Düvel of Zuchthof Düvel.

Two weeks before the show at the end of August, Va Pensiera went into training at Matthias Klatt's stable, after she did not prove to be in foal.  "Due to illness, the owner switched to my training stable," stated Matthias Klatt, who is also the director for dressage at the Hanoverian Society.

"A hint (of this training) to the commission colleagues was given only just before the presentation of Va Pensiera," said the Hanoverian society. "Although Matthias Klatt did not participate in the evaluation during the presentation of the mare, the concern of bias is present. In addition, the conduct of Matthias Klatt lacks the desired sensitivity with the issue of good governance."

Good Governance Officer and the Supervisory Board received individual written explanations from Matthias Klatt and Ulrich Hahne on the matter. They apologized for errors committed and Matthias Klatt acknowledged his incorrect conduct without exception.

"I completely misjudged the situation in the external presentation and did not consider the specific contents of the Good Governance Guidelines," said Klatt. "As a result of the discussions and queries that have been directed at me in this regard in recent days from the Board and from the Good Governance Officer, I have become aware that I did not behave correctly. From today's point of view, I should have either refused the 14-day training of the mare or approached my colleagues many days before the show and renounced my activity as a show judge of the HvdD show."

Only last week, the Hanoverian society issued a statement and decision, adding that "the processing of the violation in this case has taken far too long. Even though the Good Governance Guideline does not contain any sanctions for incorrect behavior, the relevant higher-level board should make a recommendation in such cases."

The complete statement from the Hanoverian society here.