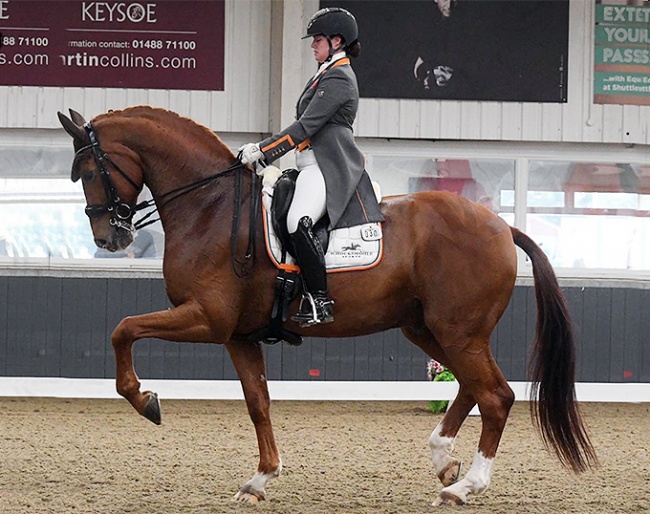 Dirubinoo is bred by Alice's mom Sarah Oppenheimer and was started by Alice as a 3-year old.

The pair did its first show in the spring of 2013 and in September grabbed the bronze medal at the 2013 British Young Horse Championships in the 4-year old division.

A two year break from competition followed and they made their come back in 2016 at M-level. In 2017 they moved up to national Prix St Georges level. In 2019 they did their first Grand Prix tests. They were entered for the 2020 British Grand Prix Championship but did not compete.

In 2021 Oppenheimer made her international show debut on Dirubinio, straight at Grand prix level. They premiered at the CDI Wellington Heckfield and scored 67.283%, two months later they rode at the CDI Hartpury, where they posted 66.848% in the Grand Prix.

In an interview with Horse & Hound in April 2021, Oppenheimer stated that "Robin" spent six months in training with Carl Hester "a few years ago, which gave me a way forward with how to produce him." Most recently she has worked the horse with the help of Charlotte Dujardin and coach Erik Theilgaard.

A Change of Reins

"A few months ago Dirubinio made the move to Emile Faurie for Emile to take over the reins," Oppenheimer explained. "As you all know I’ve always believed in this horse and his ability but I haven’t always thought I was the right rider to bring out the best in him."

Oppenheimer continued, "Emile is an amazing rider and has such a wealth of experience and we all believe he is the best rider for Robin. It’s so exciting to see their partnership develop."