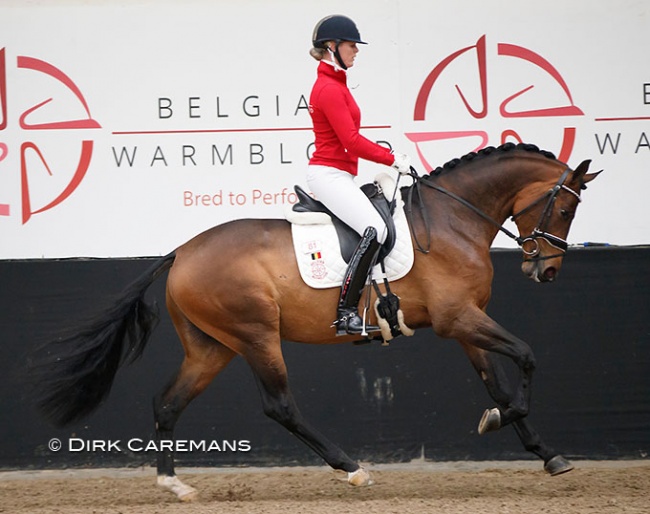 Lithuanian Grand Prix rider Sandro Sysojeva has added the 6-year old Westfalian stallion Mentor to her string of horses to secure a solid line-up of hopefuls for the 2024 Paris Olympic Games.

Mentor is a 2015 born Westfalian by Millennium out of Flying Princess (by Florestan x Tivoli). He is bred by Heinrich Ramsbrock.

Joyce Lenaerts of the Beukenvallei trained and prepared him for two stallion licensings in the winter of 2018.

He was presented and approved at the 2018 Belgian warmblood stallion licensing in Belgium, and at the same time was accepted at the 2018 KWPN Stallion Licensing to do the performance testing in The Netherlands, which he never did.

Since the approvals Mentor disappeared from the sport and breeding scene.

Mentor is the second Millennium offspring that the 38-year old Sysojeva now has in her barn. She also owns the 5-year old Oldenburg mare Maxima Bella (by Millennium x Competent) with whom she finished 25th in the consolation finals on 72.6 points at the 2021 World Young Horse Championships in Verden, Germany.

Sysojeva has a barn full of FEI horses. She has been competing the 8-year old Jack Daniel's (by Charmeur x Rock Forever) at seven international Grand Prix shows this year. The same year she campaigned the 7-year old Found Boy (by Foundation x Furstenball) and Krasko's 7-year old Furst One (by Furstenhof x St. Moritz) at international small tour level.

Sysjova's most successful horse to date is the 13-year old Furst (by Florenciano x Furst Piccolo) which she competed at international small tour level from 2016 till 2020. She booked 12 victories with him out of 31 tests. He did his last CDI in October 2020. He has been put to sleep following a freak paddock accident which led to a fatal bacterial infection. Despite all medical efforts he could not be saved.