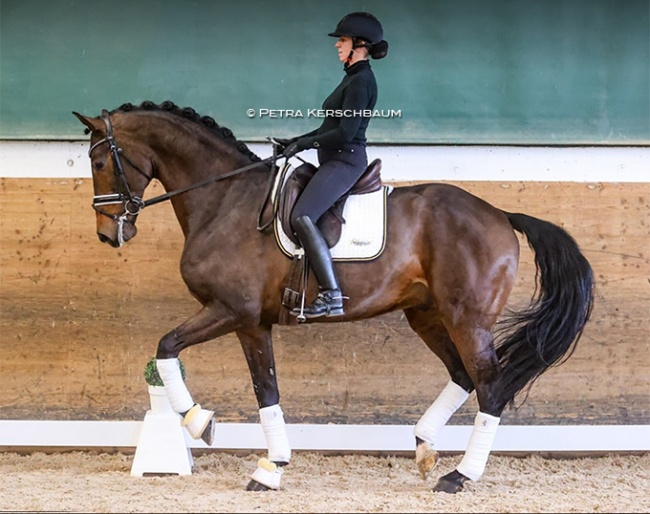 Knock-Out is 2015 born Dutch warmblood stallion by Expression out of Slunora (by Ferro.x Goodtimes). He is bred by S. Bloem in The Netherlands.

The bay Knock-Out was first licensed at the 2018 KWPN Stallion Licensing in 's Hertogenbosch, where he was named premium stallion and placed fifth in the premiu ring. He was owned by R. Kauffeld-Jansen at the time and sold in a private deal to Andreas Helgstrand and Søren Grønborg.

Knock-Out begun the mandatory KWPN Performance Testing in the spring of 2018, but did not complete it, nor did he try again in the autumn, so he ended up not being allowed to breed for the Dutch warmblood society. The namesake Knock-Out that is KWPN licensed is by Ebony. He won the performance test in 2018.

Instead Helgstrand presented his Knock-Out at the 2018 Danish warmblood licensing a month later, where the colt was also named a premium stallion. The colt went on to become the high scorer of the Danish stallion performance test with a total score of 828.50 points. He was also approved for Oldenburg.

While most of Helgstrand's young stallions are actively competed at illustrious young sport horse competitions and championships, Knock Out was never shown. There is no record of any competition results in the database of the Danish equestrian federation.

He stood at stud at Helgstrand and was trained by riders such as Betina Jaeger and Michael Grønne Christensen. The rising 7-year old is schooling the Grand Prix movements.

Astrid Neumayer has acquired the stallion to stand at stud as well as a future Grand Prix hopeful.

The horse   arrived in Austria a few weeks ago.