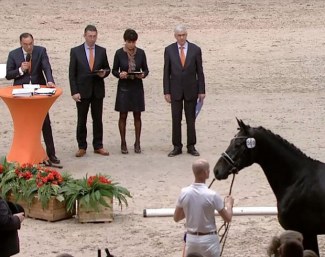 Fifty-three dressage bred colts have been approved to move to the Stallion Performance Test at the 2018 KWPN Stallion Licensing in 's Hertogenbosch, The Netherlands, on Saturday 3 February 2018.

The KWPN licensing committee needed two full days to asses the young colts in the second and third place of the licensing process. In The Netherlands, KWPN stallions are only allowed to breed after they successfully completed their Stallion performance Test, which is why they approve a generous amount of colts in the third phase in 's Hertogenbosch. Many are known to drop out or get sold before their mandatory test.

On the first day, Friday 2 February, 28 colts made the cut, while on the second day 25 of them were accepted. This brings the total to 53 dressage bred colts. Eight stallions in particular were selected for the premium ring.

The 8 premium colts are:

The other 45 approved colts are