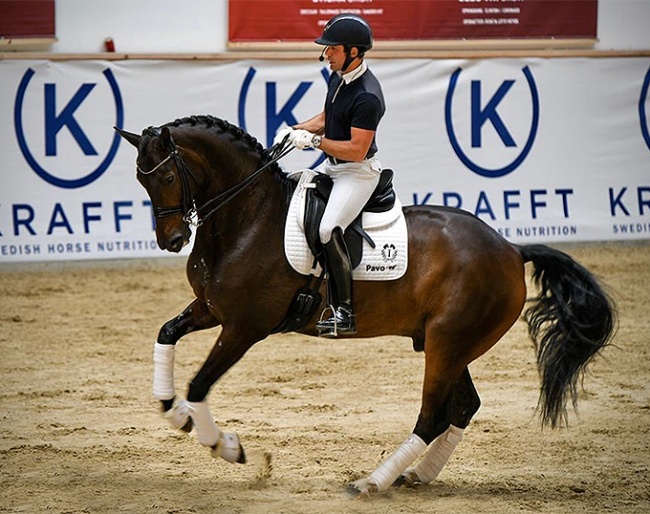 America's number one young rider Christian Simonson has secured a Grand Prix hopeful, S.O.A.L., to prepare his transition to Under 25 level.

S.O.A.L is an 11-year old Danish warmblood horse whose name stands for "Son of a Lady."

He is by Soreldo out of Western Lady (by Welt Hit II) and bred in Denmark by Trine and Allan Severinsen.

The dark bay gelding made his competition start rather late in life at age 8 under Carina Cassoe Kruth.

She first competed him in January 2019 in Egum at MB-level and placed second with 71.41%. In the summer of 2019 he move up to national Prix St Georges level.

Kruth kept him at small tour level and competed him through October 2020. They did their first and only CDI together in Vilhelmsborg in October 2020, scoring 68.471% in the Prix St Georges and 69.235% in the Intermediaire I.

The horse was sent to Severo Jurado Lopez to be further developed to Grand Prix level and sold.

S.O.A.L., or Sofus as Severo Jurado Lopez called him, has been sold to Monaco Sporthorses, the company of Christian Simonson and his parents.

The 19-year old Simonson is trained by U.S. Olympian Adrienne Lyle and follows her to Florida in winters and Colorado in summers. His top horse is the 10-year old Danish warmblood Zeaball Diawind (by Furstenball x Zardin Firfod) with whom he won the 2021 North American and U.S. Young Riders Championships.  Simonson and Zeaball also did their first Discover Dressage Euro tour in 2021 and made an impression at the CDIO-Y Hagen, where he placed second in the team test amidst Germany's best young riders.

Simonson has two years left as a young rider but is slowly preparing for his jump into the Under 25 division.

"This year the plan for Zee is to do some of the small tour CDI’s and then possibly the U.S. European tour," Christian told Eurodressage, referring to his plans with Zeaball. "For Sofus the plan is to move towards the U25 or so."

S.O.A.L. has not yet arrived in Florida.  "I tried him about a month ago, he hasn’t arrived yet in Florida due to all the craziness with flights and Covid," Christian explained. "I think we will just take it slowly with him, with a larger aim for next season."