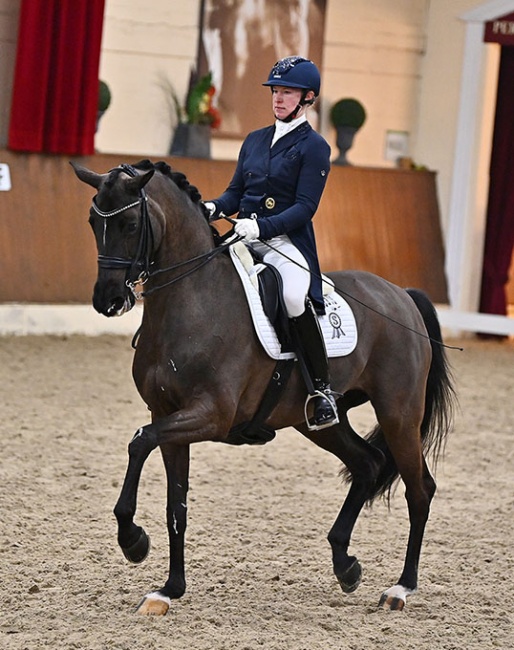 Saphira Royal is a 13-year old mare by San Amour out of Her Highness (by Monteverdi x Mackensen x Pasteur xx). She is bred by Herbert Werth and owned by Rissian Elena Knyaginicheva.

Owned originally by Christine Bauer's Next Generation Dressage Horses, the black mare began her competition career as a 3-year old under Lydia Camp, who finished fourth with her at the 2012 Bundeschampionate.

In 2012 Georg Etienne took over the ride for a few months, after which Kira Wulferding climbed on board and rode her to bronze at the 2013 Bundeschampionate. Kira competed her through 2014 and landed fifth place at the 2014 Bundeschampionate for 5-year olds.

Saphira Royal got a new rider in 2015: Stefanie Wolf. She rode her to a 4th place at the  2015 Bundeschampionate and took her to S-level in 2016. In 2016 the mare sold to Johann Hinnemann and Wolf went on to represent Germany at the 2016 World Young Horse Championships in Ermelo and scored the bronze medal.

Between 2017 and 2018 Wolf rode the mare at four internationals at small tour level: the CDI in Ermelo, Hagen, Munich and Aachen. In that period Hinnemann sold Saphira Royal to Russian dressage horse investor Elena Knyaginicheva.

The CDI Aachen in July 2018 was Wolf's last show on the mare.

In May 2019, Knyaginicheva allocated the ride on Saphira Royal to Kristina Bröring-Sprehe. At the time she was on a break from competitive riding pregnant with her first child and Monica Theodorescu rode the mare for a while.

Sprehe's first start on Saphira Royal was in January 2020 in an unrecognized Test of Choice class at the CDN Ankum. Only one year later, at the 2021 CDN Vechta on 28 February 2021, the pair rode in its first official, national Grand Prix test to finish second with 74.133%.

Their international show debut followed two months later at the CDI Hagen in April 2021, where they posted 70.891% in the Grand Prix. They only rode one test. A month later the posted 64.174% at the CDI Munich in May 2021. It was their last show and international as a combination.

Owner Elena Knyaginicheva, who over the years has had horses at Hof Kasselmann, Johann Hinnemann, Patrik Kittel and Andreas Helgstrand, has grouped all her horses back together at Hof Kasselmann, including Saphira Royal and the Grand Prix stallion Rocky Lee, sire of World young horse Champion Revolution.

Nicole Wego-Engelmeyer has been riding Saphira Royal for less than a month under the supervision of her coach Johannes Augustin.

The pair made its show debut at the CDN Ankum today and finished second with 76.000%. The class of 20 strong was judged by Ralph Schmidt, Ulrike Böckler and Heinz-Holger Lammers, who had more generous scores to distribute in Ankum. The winner of the test was Isabell Werth on Superb (by Suprice x Donautanz) with a whopping 79.533%. No less than eight pairs scored above 72%.

"I'm more than happy," Nicole told Eurodressage. "I've been riding Saphira for just three weeks and she's really grown close to my heart. There is chemistry between us and it was incredible today in such a strong field of starters. I'm over the moon and also a bit lost for words."

Wego continued, "she is with us as Kristina is pregnant again. I can't tell much about future plans, except that she'll do a few shows again and really get established in Grand Prix sport."