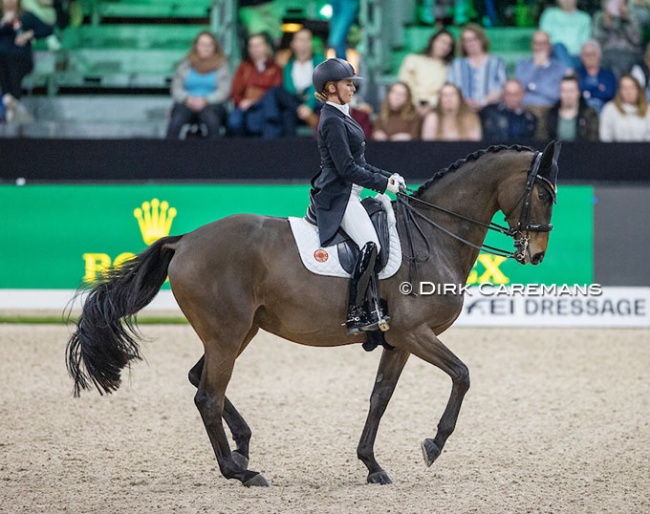 Germany’s golden girls - the Olympic and European champions Jessica von Bredow-Werndl and her 15-year-old mare TSF Dalera BB - were the undisputed winners of today’s sixth and last qualifying leg of the FEI Dressage World Cup™ 2021/2022 Western European League at ’s-Hertogenbosch in The Netherlands.

Another outstanding performance from the pair who bagged two gold medals at the Tokyo 2020 Olympic Games last August and another three at the FEI European Championships the following month saw them awarded the winning score of 90.555 to leave the result beyond doubt when last to go.

The harmony between the dynamic duo was more palpable than ever today, the mare perhaps taking extra care of her dancing partner because this week the World No. 1 athlete announced that she is expecting her second baby to arrive in August. Last time out they also won on home ground at Neumünster despite a giddy moment from Dalera in extended canter. Today however the mare was the picture of calm and control.

“I’ve never had this feeling with her before, it was like doing the test in there was the most normal thing in the world and it was so much fun to ride her!”, said von Bredow-Werndl who pinned defending series champion and compatriot Isabell Werth into runner-up spot ahead of Sweden’s Patrik Kittel in third.

The busy atmosphere in the Brabanthallen at ’s-Hertogenbosch was in stark contrast to that experienced at many of the previous rounds of the series which were restricted due to pandemic regulations. The Dutch venue was buzzing so it was all-the-more pleasing for British veteran, Richard Davison, to find himself holding the lead with Bubblingh at the half-way stage.

The 17-year-old gelding is sometimes inclined to boil over due to tension, but today he really held it together to present a lovely steady picture during a pleasing Freestyle that clocked up a score of 77.205 that would prove plenty good enough for fifth place at the end of the day.

Kittel was the first to break the 80 percent barrier when fourth-last to go with the charming 10-year-old mare Forever Young HRH. He said this evening that he had no great expectations for her coming to the show “but she gave me the best feeling!”. With her big ears pricked and listening to his every prompt she seemed to grow through the test, showing lovely elevation and great power in passage before striding home to the strains of Billy Idol’s “Hot in the City”. When 82.500 went up on the board then his was the mark to beat, but Isabell Werth and Quantaz posted 84.870 to dethrone the Swedish duo right away.

The German superstar is chasing her fourth consecutive FEI Dressage World Cup™ title and her sixth in total - her very first recorded exactly 30 years ago in Gothenburg, Sweden. She is very happy with the progress she is making with the 12-year-old stallion. “He felt very well today and it was a super test for him”, she said. When Great Britain’s Charlotte Fry and Dark Legend were awarded 82.325 then only von Bredow-Werndl could edge the reigning champion, and they succeeded with a masterclass in communication.

The Olympic and European champion might have expected a bigger score, but as she pointed out afterwards she doesn’t fret about that.

“I decided a few years ago I don’t care too much about the score because I can’t influence it - the only thing I can influence is my riding and my performance and today Dalera was just incredible!”, she said.

So now she is fully assured of a place at the FEI Dressage World Cup™ 2022 Final next month. It’s no easy job being German and booking one of the three places on offer to your country because defending champion Werth is automatically entitled to one of them, so a sub-plot of fierce competition is playing out in the background as the rest of the super-talented German contingent try to make the cut.

Today’s result boosted von Bredow-Werndl to the top of the Western European League rankings so she has safely booked the second spot. However tomorrow will be a nervous day for Fredric Wandres who lies third in the rankings after a successful winter season.

Because Helen Langehanenberg, series champion with Damon Hill back in 2013, lines out at Motesice in Slovakia tomorrow and, should she win and collect those precious 20 qualifying points, then she will edge Wandres out of his chance of a tilt at the coveted title by just a single point. That’s all still to play out….