Jessica von Bredow-Werndl Masterclass: "It is Not How Far We Get, It is How We Get There” 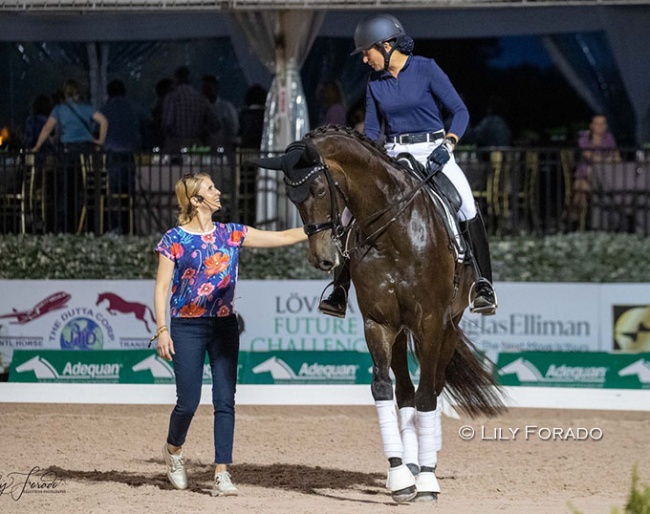 Wellington people were anxious and excited to welcome Olympic gold medalist Jessica von Bredow-Werndl in their horse paradise for a unique Masterclass at the close of the 2022 Global Dressage Festival. As one of the biggest names on the circuit right now, von Bredow-Werndl offered a big opportunity and chance that doesn’t come along often to dressage lovers: to learn from the best.

Funny, down to earth, positive and above all showing respect and passion for horses, Jessica educated and entertained the Wellington crowd on Thursday 24 March 2022  She coached 5 pairs with horses ranging from 6 to 13 years of age. That spectrum allowed the number one in the world to address a lot of endless advices and broadly applicable training exercises for horses and riders.

Before diving into the clinic, itself, Jessica explained the importance of Dressage and Training. She recalled, “it is not about how far we get, it is about how we get there.” A roller coaster can perfectly define a dressage rider's career, but as Jessica explained, “remind yourself why you do this sport, it’s because we love the horses. It’s important to enjoy the journey with them, to look after them, to have fun. I invite you to enjoy what you do together with horses.”

With that personal, horsey motivation speech, Jessica started off her Masterclass and the crowd stayed focused and opened minded to her magic formula.

“Hey Siri… Let’s Focus on the Warm Up”

The first pair to enter the arena and soak up the atmosphere was Hannah Beaulieu with Siri, an impressive 6-year-old Oldenburg mare by Dante Weltino x Sandro Hit.  While the duo was doing the first strides in the arena, von Bredow-Werndl set the tone recalling that is not about the expression of the horse, it’s about the confidence they have in the arena. Siri was on fire and Jessica decided to focus on the warm up. To her the warm up is a checkup for rider and horse. During the 45-minute session, they worked on exercises to cope with the atmosphere and feel comfortable.

Jessica encouraged Beaulieu to slow down, make some trot transitions, always give a break, pat the horse and above all give the rein.  In other words, those small tips contributed to Siri calming down a bit within the short session.

“The warm up is very important. We have to make it as short is possible, and as long as necessary. We should use the power of concentration for later," said Jessica.

At the end of the session, they worked on some exercises to introduce the flying changes. Jessica revealed her favourite one: a half circle to go on the centerline towards the short side and then do the flying change. Jessica added another exercise for horses who have a lot of expression on the hindleg: from the centerline continue with a leg yield and progress with shoulder-in or haunches-in and then the aid for the flying change.  The haunches-in helps to activate the inside hind leg for horses that are slower behind. “Take all of the weight behind the saddle, pretend that you’re taking off in an airplane.”

The Olympic and European champion saw a clear potential in Siri, given the brilliance of her paces. Hannah and Siri set the bar for the rest of the session. Similar themes, which the spectators saw in the first  session carried through even with the upper-level horses.  Dressage is about ignoring the mistakes. “If she makes a mistake, ignore it, otherwise she does not get the confidence,” Jessica said as the mare showed off her beautiful changes.

The Importance of Breaks

The second pair to enter in the arena was Louisa Marcelle-Eadie and Lillie Keenan's 8-year-old Elan de Chenu (by Kerido du DonJon out of Independence Day). During the session, Jessica’s wisdom helped this chestnut gelding to work more over his back and push and carry from the hindlegs

Jessica made several points, but the most important one was the use of the snaffle: “you have to lift his front end, don’t hold him, it is a big difference.”

Between the exercises, Jessica made a point on giving the horse a break. “For all the horses is so important to work with breaks. If the horse does his best job, stop and then pat him, that will help him to understand”.

This pair worked on shoulder-in and keeping the horse in front of the seat.  Jessica instructed the rider to remember the importance of the seat: “Really focus on your seat when you prepare the flying change.  When you want him to do uphill changes, you have to sit like it.” By the end, Elan de Chenu was stretching nicely and carrying himself on the hindleg. It was clear the pair had made progress.

The advice and tips continued to roll out for the Wellington audience. Emily Donaldson on the 13-year-old American bred Hanoverian gelding Beaujolais (by Bugatti Hilltop x Contucci) was the third rider to go. An atmosphere of education was palpable, and since minute one Jessica provided very interesting help and guidance to the rider.

The main focus for them was how to warm-up a 13-year-old horse and cope with the activity of the hindleg. Jessica suggested the importance of control: “Real control comes from the hind leg,  we have to focus on what happens behind the saddle."

Fourth to go, was Kristina Harrison-Antell with the 9-year-old  I Felix (by Fidertanz x UB40). Jessica loved the rebelliousness of I Felix in the warm-up phase. “Let the horses be cheeky, they need to develop their personality… if we suppress it, they can’t come into their own."

Kristina Harrison-Antell and I Felix schooled flying changes, half passes, and transitions forward and back. These exercises brought out impressive expression from the gelding and the dressage mantra “forward, forward” was no problem for this horse.

Jessica adored Kristina’s hot horse and called him as an airplane. They did a mixture of carrying and pushing exercises, which was the perfect equation to get superpower from behind. Von Bredow-Werndl encouraged the rider to motivate the horse through a combination of lateral exercises with transitions and half-halts in corners with the aim of activating the hind leg and not using the rein.

Sit Back and Give Rein

The last rider to go was Ali Potasky riding the 9-year-old KWPN gelding INXS van de Wolfshoeve (by Everdale x Rousseau). Jessica brought the last session to a culminated with powerful and encouraging moments. As a Yoga lover, Jessica animated Potasky to think like that, that is to say: stretch the neck, give the rein, and maintain a short body. “We want the expression from behind," she stressed.

Quality over quantity is what she emphasised for the importance of self-carrying strides. Last but not least, the ultimate exercise was the posting seat for the passage. “The freedom and energy that you create to collect on his hindlegs gives energy to the horse to go forward. Otherwise, the horse gets stuck in the back," she cited.

Not every day you have the opportunity to learn from best. This year the Wellington community was fortunate to get a glimpse of the training methods of the number one in the world. Her wisdom and above all her appreciation and love for the horses and sport are worth mentioning. Hats off for Jessica for conducting a 4-hour session to the horse addicted and dressage loving audience of Wellington. 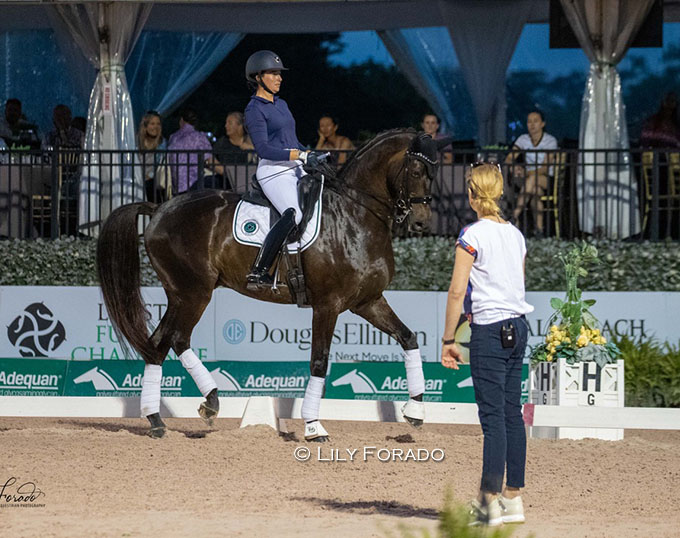