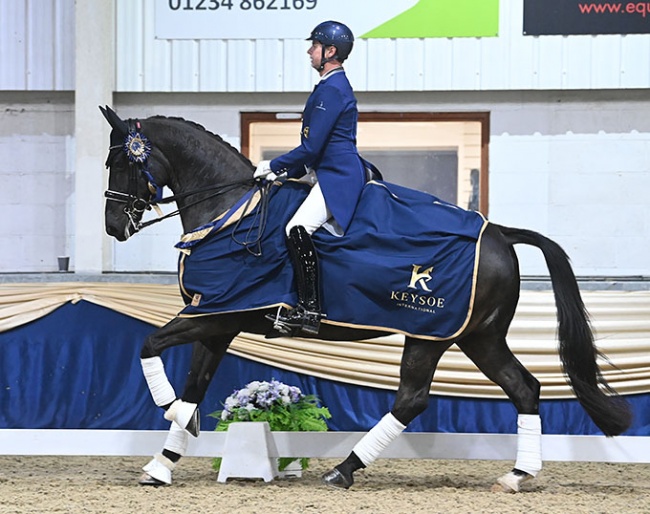 A predominantly British contingent gathered at Keysoe for a fantastic three days of competition at the Bedfordshire venue’s spring CDI, the first UK-based international of the year on 17 – 20 March 2022.

Carl Hester and En Vogue, who he co-owns with Sandra Biddlecombe, Charlotte Dujardin, and Lady Anne Evans, had a clear win the Grand Prix, which took place on the Friday evening. The pair earned a score of 73.69% for a performance showing many moments of brilliance marred only by some early-season nerves from the sensitive, Jazz-sired gelding.

This was the horse’s first outing since his sensational performances at both Tokyo and the European Championships in Hagen, and though his immense class was unmistakeable throughout the Grand Prix, some moments of tension were costly to peg the score back.

A similar story unfolded in the Special, with super work through the test until Vogue boiled over on the final centre line to score 1s for the piaffe. Such was the quality of their work however that they still topped the leaderboard on 69.57% to hold the lead from Gareth Hughes and Claudine Kroll’s 13-year-old stallion, KK Dominant (by Diamond Hit x Rubin Royal).

With their trainer Carl Hester looking on, Hawtins Delicato (by Diamond Hit x Regazzoni) and Fiona, who owns him together with her mum Penny Bigwood, delivered an expressive and enjoyable programme for 73.22%. A mistake in the one-tempi flying changes was expensive but a high quality of work throughout kept the score buoyant for the win.

Also in the frame were runners-up Hayley Watson-Greaves and Rubins Nite, who scored 71.39%, and Dan Watson with Butterfly IV who finished a creditable third on 70.15%.

Amy Woodhead enjoyed two outstanding wins with Emma Blundells’s exquisite 11-year-old mare Mount St John VIP (by Vivaldi x Donnerhall) posting 73.50% in the Prix St Georges and 73.64% in the Inter I. This was the talented combination’s international debut as Mount St John VIP has been campaigned for the past two years by Emma herself.

It was the turn of Lucinda Elliott with Judith Davis’s Hawtins Soave (by Sir Donnerhall x Belissimo M) to take the honours in the Inter I Freestyle, posting the winning mark of 72.58%. Completing the podium was the Aberdeen-based combination of Fenella Quinn and Empire B (72.50%), representing Ireland, who finished on the winners’ heels with 72.50%, whilst Gareth Hughes and Georgina Wilkinson’s Happiness finished third on 71.95%.

“I was delighted with her,” said Lucinda about the 11-year-old mare who, alongside Hawtins Delicato, was proudly flying the flag for the Hawtins Stud. “She was such a good girl all week and although we had a few miscommunications earlier in the show, it all fell into place for the freestyle as she became more confident. It was a great experience for her.”

The programme, which they used for the 2021 Dressage Future Elite Championship at the Horse of the Year Show, features atmospheric, emotive music compiled by Kim Warren. Elegant and light, it suits the mare well. “It was a clean test, and I was pleased with her pirouettes,” commented Lucinda. “After three days of competition she had gained in confidence - she was really up for it, really taking me.”

Deutram and Amy in Charge of U25

Young Grand Prix stars of the future displayed their potential in the CDIU25 classes, a category designed to bridge the gap between young rider and senior big tour competition.

Dylan Deutrom (24), who’s based at Hicks Equestrian in Hampshire where he’s worked as the yard’s rider since 2014, rode a stylish 68%-plus winning round in the CDIU25 Inter II with Sunlit Uplands (pictured above). Sunlit Uplands (Don Henrico x Hitchcock), now 14, has been brought through the levels by Dylan for the past six years and they recently placed third in the Inter II at Myerscough Premier League.

Lucy Amy (24) rose to the challenge in the U25 Grand Prix to take the win on 68.00% with her long-time ride, the 13-year-old Holsteiner gelding, Rudy (by Cancara) - pictured above.

“It was very nice to win and great that everything came together at the show,” said the Jersey-born 24-year-old, clearly delighted with the start to their 2022 campaign. “He [Rudy] was brilliant. I was pleased with the pirouettes, they felt secure, and he really picked up and felt much stronger on that final centre line. I was very happy with him.”

Rudy was bought from the Brightwells auction as a two-year-old with a future in show jumping in mind. “On Jersey, riders generally do a bit of everything, but when we won the Prelim at the Nationals in 2014, I thought to myself, ‘I like this dressage!’”

A move to Wiltshire to pursue a career in the sport ensued, and the pair hasn’t looked back going from Prelim eight years ago to a place on the British team at the FEI U25 European Championships in Hagen last year, and they also competed in the Grand Prix at the 2021 Nationals.

“Rudy will always try, but he’s gained much more confidence recently,” she continued. “He is now so much stronger. I’m hoping to do senior international Grand Prix in the future but my main focus this year is the U25s.”

Lucy, who trains with Gareth Hughes, was also at Keysoe proudly supporting Ruby Hughes who was successfully campaigning her former international ride, Extra Time P, in the Junior classes. “Ruby had an amazing show. They were such a pleasure to watch and I feel like a proud parent! I’m so happy to be a part of Ruby’s achievements.”

Lucy and Rudy also achieved a solid score of 71.54% to take the U25 Grand Prix Freestyle.