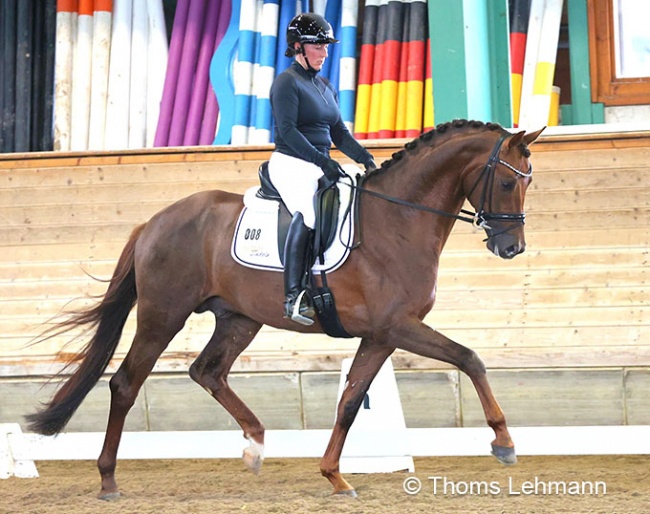 In 2022 the German Equestrian Federation and its breed societies are holding a pilot project of a "shortened suitability tests" over two days as a possible replacement for the 14-day stallion suitability test.

Ten colts were entered for the mini test in Warendorf which concluded today.  The high scorer was the 4-year old KWPN bred stallion, Dutch Dream (by Dream Boy x Furst romancier). The liver chestnut scored a total of 8.64 points with 8.8 for trot, 8.7 for canter, 8.0 for walk, 8.8 for rideability and 9 for willingness to work.

Dutch Dream is bred by Ab de Lange and owned by Stal Brinkman and Jacques Maree. He is licensed in Germany with the Oldenburg society.  According to Horses.nl, he was initially entered for the sport test in Münster in January but knocked himself in the warm-up and got withdrawn.

At the mini test he was presented by Edith Chardon, the sister of the 2021 European four-in-hand carriage driving champion Bram Chardon. A month ago the duo won the VSN Trophy competition, a 3-year old talent spotting show.

He was presented at the testing by Justine Ludot, a young French professional rider who worked as the home rider for Swiss show jumper Steve Guerdat before becoming a rider at the stallion station Ferienhof Stucker in Germany. Legendary is bred by Horst Schepper and owned by Sönke Rothenberger.

The third best result was for the 4-year old Trakehner bred Schäplitzer (by His Moment x Exclusiv x Freudenfest). He scored 8.40 points in total.

He is bred and owned by Bernhard Langels.