Why So Round? Open the Frame! 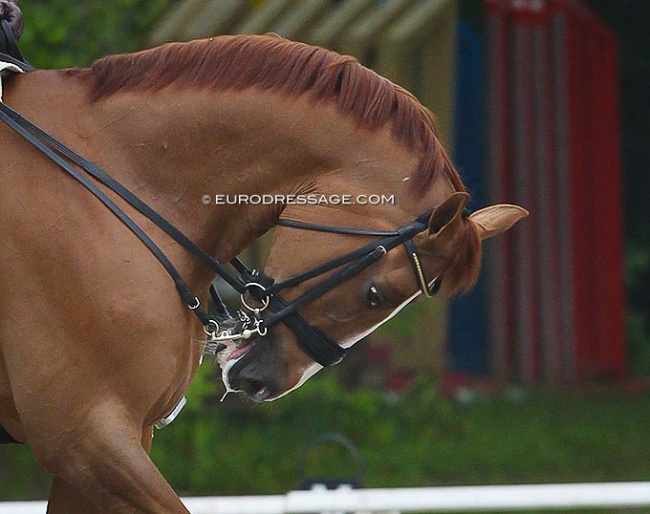 In FEI dressage rules the correct frame is defined to be slightly in front of the vertical or approaching it in collected movements. Vertical is mentioned 9 times, and there are a few mentions of lengthening the frame in extended gaits. The correct frame is  an important foundation for the wellbeing of equine athletes, so it would be logical that this would also be considered when training horses.

I have a feeling that in competitions the frames have slowly started to open again during the past few years, but it still doesn't seem to be mainstream yet. Why is this important key to balance so difficult, sensitive and at the same time such an ignored topic?

From arguments into practice

Moving in a “round enough” frame and slightly behind the vertical is still commonly considered to be preferable or “just fine” in training. This way of moving is seen literally everywhere and it’s not uncommon to hear trainers encourage their students to seek a little bit more roundness, sometimes even with “correctly used” auxiliary reins, which practically all result in a horse moving behind the vertical.

For riders the horse may feel round and kind of relaxed, for a trainer this can be a way to block resistance and find steadiness in the frame, but for the horse it’s a step into wrong direction. Some say it’s not a big deal and we shouldn’t measure these things with a ruler, others remind that the horse just doesn’t have the strength to bring the nose in front of the vertical yet, and a third group wants to get the horse a bit rounder in the neck to bring the back up. They will also kindly remind us that they would then just lift the horse up into a competition frame when needed in a show-ring.
Everyone who has ridden a little longer has heard or used these sentences, they are common and used globally.

It was interesting to see studies where a total of 355 horses’ head and neck positions were followed in the warm-up arena at competitions, resulting in the finding that only less than 12% of the observed horses were moving in front of vertical and over 69% of these horses were moving behind the vertical(1).

Nowadays almost everyone would say that rollkur is bad, but this routine of excessive roundness can surprisingly easily create a situation that makes progress much more difficult than it should be. When rollkur became clearly undesirable, a few different kinds of "round frame options" with "time restrictions" against static postures were included in FEI stewards manual.

“According to the studies about head and neck position (HNP) of the horse the flexion of the neck influences body biomechanics and physiology. Elevating the poll and putting the nose behind the vertical independently decreases the stride length, and the largest decrease in stride length is observed through the combination of poll elevation and nose placement behind the vertical(2).

Hyperflexion of the neck leads to a higher rise in muscle enzyme (LDH) activity and both mean consecutive difference and motor unit action potential variables in the neck muscles.(4)”

The frame can be the problem

Why do riders then choose or allow this roundness? Sometimes roundness comes from training, sometimes the horse finds it very easy, and may suggest it himself. Sometimes riders are not totally sure when and how the frame should be corrected. Sometimes it is told to be correct. The roundness may even actually feel good. Despite that, the frame can easily block your progress. Using or ignoring bad posture while trying to achieve something technical is not worth it, it only means you will need to correct the technique later because of the balance and movement quality issues that will follow from the bad posture.

I meet riders who describe different kind of problems with the quality of contact and balance. If the horse has used to move a little behind the vertical, he can often be surprisingly static in his neck and body, resulting in slower response to rider’s aids. This is because of the effects of the round posture and excessive tension in the body. Even a horse that moves just a little bit behind the vertical has clear tension in the poll that is measurable and disturbing the movement. I’ll get deeper into this in the next part of this article.

Some riders describe problems with the rhythm of walk. If the neck movement is lacking or the movement pattern of the neck has changed because of the posture, it is more difficult for the back to move normally, and this can be shown as lateral walk. When rider learns to open the frame, encourage the natural neck movement, and finds the idea of forward-thinking hand combined with good activity in the movement, the walk rhythm becomes much easier.

Some riders are struggling with the impulsion in collection and others experience different kind of contact, posture, and balance related problems. Usually, the frame and contact become a problem at the point when quality of collection is becoming valuable, and the rider feels that the horse is not totally available for the rider. Something is missing and it’s not uncommon to hear not to worry that the frame and the contact will become better in the future when the horse is ready. This hopeful waiting for the brighter future is usually a waste of time. If the problem with the frame is not recognized and corrected, the horse will learn a non-optimal way of moving that needs to be corrected later.

Effects of closing the frame

Closing the frame doesn’t do any good in the body. It challenges the balance and vision which again is very important for the balance. Head and neck posture can change how the inner ear feels the posture. This is an important system that we shouldn’t mess with. Tension in the poll has a direct link into eyes and jaw via muscular and fascial connections.

Closing the frame behind the vertical pushes the lower jaw slightly forward and this position allows less room in the throat area, which not only feels uncomfortable – it affects both the breathing, the tongue and the parotid gland functions.  The tongue directly affects the contact and can cause different compensations in the movement. Breathing affects the whole trunk and the inner organs via fascial connections and affects even emotions. Tension in the neck can also affect the nervous system and therefore the movement directly and indirectly in many ways. The closed frame also affects the feelings via the fascial connections and the autonomic nervous system, increasing sympathetic nervous system activity and resulting at its worst in flight response and explosive behaviour. A too round frame affects the rest of the body strongly even because of changes in biomechanics, fascial and ligament tensions, and overall loading of the structures. Tense muscles make sensitive proprioception impossible, and the movement loses its natural easiness.

Tilting the head behind the vertical makes it extremely difficult for the horse to give a lateral flexion that is needed in many exercises, like the lateral movements. Tension in the neck creates tension in the lumbar area and makes it more difficult to find good activity in the horse’s hind-legs. This is just a start; the list could go on.

Learn to keep the nose in front of vertical

It's good to know what is not useful and why, but even more important is that we can do something good with this information. It should be clear that balance and freedom of the movement are THE important foundation for all training, and the rider should teach the horse to move in many different frames and postures, playing with the movement, balance and energy while remaining in front of the vertical. This kind of training is useful for achieving balanced and energetic movement.

It’s in turn very important to teach riders to recognize the variations of useful frames and show them how to correct the frame if the horse is suggesting something that is not useful. Correcting a behind the vertical position is fair for the horse and pretty simple, even if it requires many repetitions.
If the horse is closing the frame, use a light and clear corrective lifting rein aid immediately, allow the hand to relax and ask the horse to move forward from a leg aid, when needed. This correction helps the horse to release tension in the poll area and find a better balance in movement because that way it is now more easily directed up and forward. It also helps to find and increase the hind-leg activity when the frame is just in front of the vertical and the poll is relaxed. The neck posture and function are extremely important for the balance of the horse. A relaxed poll helps the rider to have a good connection with the horse in different movements and exercises.  Balance creates the possibility to create good, variable, and relaxed yet effective movement.

Only the relaxed and supple use of muscles leads to dynamic and effective dressage training. Relaxation doesn’t mean sloppy or lazy, it’s a state of body and mind where good and an energy efficient natural movement begins. Healthy dressage is built on respecting the horse’s natural movement and postures. We can’t get spare parts into our horses, so we need to learn to train them as well as possible.

In the next part we will focus on practical examples and measurements of frame corrections.

Open access picture that could be cited here for source nr 1: Behavioural Scans: proportions of horses ridden with the different Head-Neck-Positions with the nasal planes in the respective categories at the warm-up area. https://www.ncbi.nlm.nih.gov/pmc/articles/PMC4121138/figure/pone-0103140-g005/