Thomas Ritter: "Who Are We to Judge?" 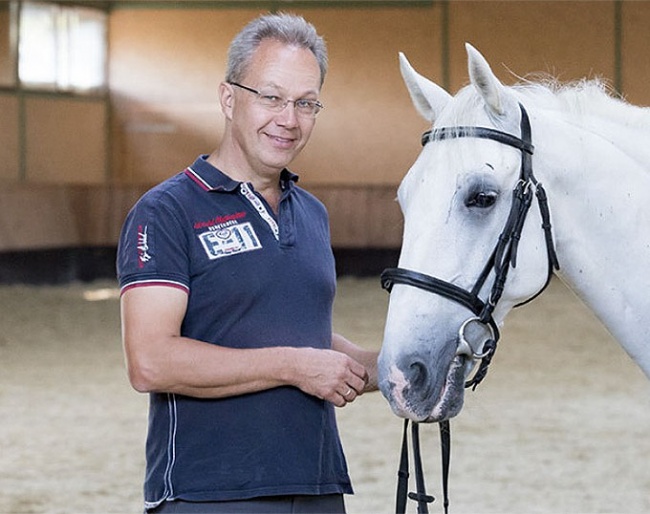 Guest column of this week is by Thomas Ritter, a professional dressage rider and trainer who has published two books on dressage; one on biomechanics and the other on long-lining. Originally from Tubingen, Germany, he is now based in Portugal with his wife Shana, where he runs a dressage training facility.

Who Are We to Judge?

When Alois Podhajsky was the director of the Spanish Riding School in Vienna, he sometimes noticed that someone watched him during the morning workouts with a disapproving eye. So he sent his groom up to the gallery to relay the message: “The Colonel couldn’t help but notice that you disapprove of his training. He is inviting you to come down and ride his horse for him because he would love to learn a better way.” Not surprisingly, nobody was brave (or incautious) enough to take the bait and say: “By God, I’m going to get up on this horse and show him how it’s done!” That’s a very clever and very effective way to silence the peanut gallery who thinks they are so much better than the riders in the arena who are actually trying their best to do a good job with their horse.

In social media, where it is very safe to criticise others (especially when you hide behind the anonymity of a screen name) because you never have to put your money where your mouth is and demonstrate your own skills, this leads very quickly to the debate whether one has to be able to ride and train to a high level in order to criticise someone else. Or whether the critic has to be able to demonstrate how to do it better than the person who is being criticised.

On the other hand, I remember Egon von Neindorff telling me that only someone who has trained horses to a certain level himself or herself can truly understand what it takes and how challenging it is to do this kind of work. This is true as well.

Learning to ride and train horses is the most difficult thing I have ever attempted, and I have heard this sentiment from many others who are highly skilled in other challenging professions. It takes everything we have, emotionally, intellectually, physically. We pour our heart and soul into it, all of our time, energy, passion, money, everything. We tend to be our own worst critics, too, because we are trying our very best every day to reach our own (sometimes impossibly) high standards, and we are constantly confronted with our own shortcomings, the horse’s challenges, sometimes challenges of scheduling, barn environment, and other factors that can be difficult to control. Typically, nobody is more aware of our mistakes and failures than we are ourselves. Nothing is more frustrating or more painful than not living up to our own expectations. We really don’t need anyone else to point our shortcomings out to us. Most likely, we are already working on them. Constantly.

There is also a surprisingly high number of riders suffering from “Impostor syndrome” (a belief that we are inadequate and incompetent despite evidence that we are actually quite skilled and successful). It’s certainly something I have always struggled with.

I think it is perfectly normal and acceptable to form an opinion and to like or dislike the way someone else rides based on what we know. It can be highly instructive to watch others ride and to try to understand what they are doing, what they are trying to accomplish, why they are doing it, and how they are doing it. We learn the most from watching the positive things that are worth emulating while ignoring the bad parts that are inevitable in every ride.

I object strongly to people who put themselves on a pedestal of moral superiority, pretending to be concerned for the welfare of the horse, when in reality they simply use their criticism of others as a way to compensate for their own fears and insecurities. They tear others down in order to appear in some way superior. They dehumanise those whom they criticise which is a form of verbal violence and a precursor to inflicting physical violence. Their zeal is similar to that of religious fanatics who torture and kill people who don’t share their exact same beliefs.

It is one thing to speak out against an abusive form of training, such as the infamous Rollkur, but it’s quite another to commit acts of violence, verbal or otherwise, against people whose riding one disagrees with.

These people often have a very one-dimensional view of the situation they are judging. They only see that a photo, a video, or a ride deviates from the ideal they hold in their mind’s eye. Never mind that it may be an ideal that only truly exceptional horses and riders are able to achieve after many years of training. Apart from very obviously abusive situations, there are always many factors involved, such as the horse’s conformation, personality, age, training history, the rider’s journey, and sometimes the pressures of the situation. Ideals and expectations have to be adjusted in order to come to an assessment that is fair to both horse and rider. Ultimately, only the rider and horse themselves know the challenges they have had to overcome, and how big or small their accomplishment is. A poor performance for one horse and rider may be absolutely brilliant for another. As always, it depends on the situation and the individual horse and rider.

Every horse and every rider are a work in progress. Nobody’s training is ever finished. Every rider makes mistakes. Every rider makes wrong decisions. Hopefully, we all recognise our mistakes and try to learn from them. We all do the best with what we know. When we know better, we hopefully do better. Even the best riders in the world have ugly moments. That’s just the reality of life when two imperfect beings are living and working together. No marriage consists only of the honeymoon. No horse-rider relationship is always harmonious and without disagreements. No horse is always on the bit, through, round, supple, balanced, straight, etc. There will always be moments where the horse is temporarily above the bit or behind the vertical, braced or stiff somewhere in his body, unbalanced, crooked. Sometimes this happens from one stride to the next. Sometimes it’s almost imperceptible. Sometimes it’s just for a brief moment. Sometimes it’s very obvious, a complete loss of balance resulting in a loss of control. The important thing is how we deal with these situations and what we learn from them.

I think we all need to learn to be kind to ourselves first in order to be able to be kind to others. Our perfectionism, the pain of our own failures, the shame we feel every time we can’t live up to our own expectations, and our own impostor syndrome can easily lead us to lash out when we see someone else make the same mistake we are struggling with or that we used to struggle with. Putting someone else down may temporarily dull our pain, but it will not solve the real problem - our own shortcomings and failures. Only working on ourselves honestly and steadily will do this. It’s a kind of zen practice, or a type of self-development with the goal of becoming the best version of ourselves as a rider and a human being we can be. Both go hand in hand.

We should resist the temptation of feeling in any way superior to someone else who is making a mistake or who isn’t as educated and skilled as we are.

We have to make peace with the fact that we are and always will be imperfect, that we will always make mistakes, that sometimes we will fall short of our own expectations, sometimes we will not be able to live up to our own standards. And we should extend the same courtesy to others. Give them the benefit of the doubt. See the positive in our own riding as well as in others. See the challenges that we had to overcome in our riding and with a particular horse. Try to see the challenges that others had to overcome. We have to forgive ourselves for the mistakes we make, and then try to do better next time. We should also forgive others for the mistakes they make, and encourage them to do better next time.

We also need to stop treating any and all mistakes as the end of the world, as abject cruelty to the horse that will ruin him forever, or as an indication that we or whoever is making the mistake is a horrible rider and a terrible human being who will never learn.

Mistakes are learning opportunities. Obstacles are challenges that need to be solved. It’s a much better use of our time and energy to work on finding positive solutions than to dwell on negatives.

We need to distinguish between actual abuse and unintentional mistakes that happen to everybody. We can still be advocates for the horse in situations that warrant it, but most of all we should try to do the best we can with our own horses so that we can lead by example - which is the most difficult thing to do. Sniping at others and pointing out their mistakes has very little value because it doesn’t help anybody, least of all the horse. It only poisons the atmosphere further and makes people more paranoid, more stressed, and more defensive, which actually makes them ride even worse and communicates itself to the horses.