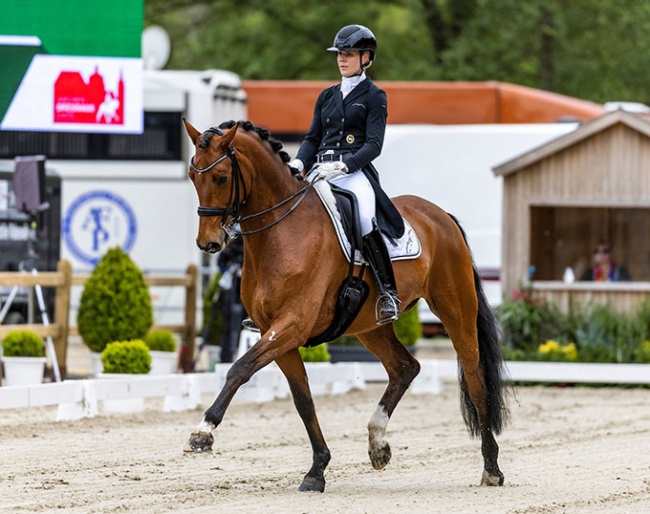 The Germans Hendrik Lochthowe and Juliane Brunkhorst were the winners one day one of the 2022 CDI Pferdefestival Redefin on 13 May 2022.

Held as an international dressage competition for the first time, Redefin seamlessly continued its familiar quality and attraction also for an international crowd. The delight of the first spectators to enjoy the sport and the meeting with like-minded people is unmistakable.

And while international jumping is taking place in front of the entrance of the riding hall in Redefin in the familiar form and format, dressage is experiencing a premiere with the internationalisation and the “move” to the Parade stadium.

Juliane Brunkhorst (Ganderkesee) is very familiar with the Pferdefestival Redefin. The trainer has known the show for many years and won the international Grand Prix de Dressage with the Holstein gelding Aperol (by Ampere x Aljano) in the Prize of the Aachen Dressur Verein e.V. ahead of Nicole Wego-Engelmeyer (Hagen a.T.W.) with Horst Collin's Oldenburg stallion Budhi. Brunkhorst scored 71.196% for the victory on Heidi Blohm's Aperol, while Engelmeyer followed in her wake with 69.326% on the Bordeaux x Likoto xx bred stallion.

This means that Brunkhorst is also one of the favourites for the Grand Prix Freestyle, presented by FUNDIS Reitsport on Sunday at the Redefin Horse Festival. By the way: Admission is free on the entire grounds – both for the jumping and dressage stadium.

The Prix St Georges was won by Hendrik Lochthowe aboard Ralph Uwe Westhoff's Westfalian gelding Sharom (by Scolari x Laureus). They posted 70.765% for the victory but had Hof Kasselmann's Evelyn Eger breathing down their neck. With the 9-year old Hanoverian gelding Darjeeling, she posted 70.647% for second place.

Among the 55 participants from 14 nations at the CDI is also Mary Hanna, the competitor with the longest journey, who has competed six times for Australia at the Olympic Games. For the dressage rider, who has already competed all over the world, the Pferdefestival Redefin has already proved to be a good decision.

“Everything is easy for us here: the stables are close to the arenas, the competition area is good and the whole infrastructure is very very horse-friendly,” emphasised the Australian, who has been in Europe since the end of March and whose goal is the World Championships in Herning, Denmark, in August.

Redefin’s Show Director Francois Kasselmann met Hanna in Australia in March and suggested that she compete in Redefin.