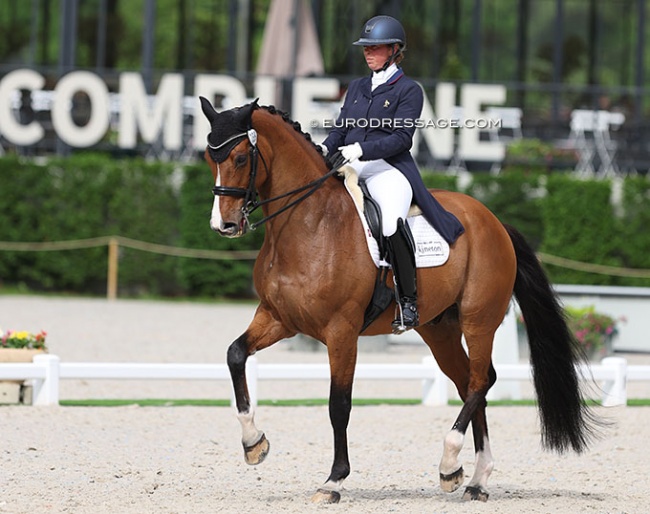 French team rider Marie Emilie Bretenoux has announced the retirement from top sport of her number one Grand Prix horse, Quartz of Jazz.

Quartz of Jazz is an 18-year old Selle Français by Lawrence out of Honey Jazz (by Urleven Pironniere). He is by bred Luc Tavernier and Anne Ricard.

Bretenoux and Quartz of Jazz were first time members of the French team at the 2017 European Championships in Gothenburg, where they finished 51st in the Grand Prix with 64.714 %.

In 2018 he was submitted to the French Elite JO/JEM Squad, which meant he was considered for team selection for the 2018 World Equestrian Games and 2020 Olympics. He competed at FEI Nations' Cup in Compiegne and Rotterdam.

After the 2018 CDI-W London he needed a long break and missed out on the 2019 European Championships in Rotterdam, but returned to the arena at the 2019 CDI Le Mans in October of that year. In the 2020 corona year he only did two CDI's in Le Mans, but in 2021 the pair went for it to clinch an Olympic team spot with starts in Le Mans, Exloo, Grote Brogel and Compiegne. They did not make the cut for Tokyo, although they were named reserves, but were selected for the 2021 European Championships in Hagen, where they placed 40th in the Grand Prix with 68.665%.

This winter they competed at the CDI-W Lyon, the CDI Le Mans in spring and finally last weekend at the CDIO Compiegne, where they posted 66.630% in their last international Grand Prix

Bretenoux announced on 27 May 2022 that her 18-year old Selle Français has retired from top sport.

"A page is turning for Quartz and I. We stop competition as a pair," Bretenoux wrote. "I can be nothing else but proud of what we have achieved together."

Quartz will now continue as a schoolmaster without the demands of high performance competition.