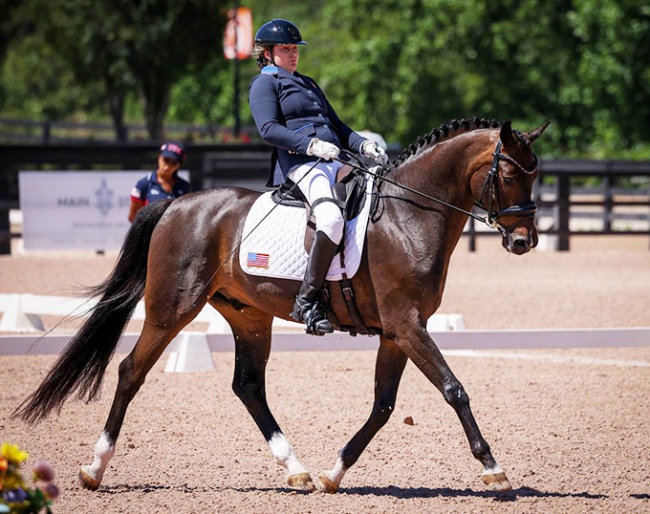 Para dressage athletes closed out an exciting weekend of competition at the Tryon International Equestrian Center (TIEC) on 17 - 19 June 2022 with a full session of musical freestyles on Sunday morning, putting their final scores in the books for the CPEDI3* competition.

After two sweltering June days, the athletes and their teams enjoyed a mild sunny day to showcase their tests.

Friday’s Individual Test scores and Saturday’s Team Test scores were combined with Sunday’s FEI Para Dressage Freestyle Test scores at a ratio of 40%, 40%, and 20%, respectively, to determine individual winners for the CPEDI3*. The event also counted as a team selection trial for the 2022 World Para Dressage Championships in Herning in August.

Beatrice de Lavalette (Loxahatchee, Fla.) and Sixth Sense, Elizabeth and Nicolas de Lavalette’s 2010 Oldenburg gelding, performed a Grade II Freestyle to a soundtrack that included music from the movie Madagascar and choreography that showed off the striking dark bay gelding’s impressive movement. They were rewarded with a score of 75.945%, a new personal best.

“I’ve had ‘Sensei’ since December, so it’s a new partnership,” said de Lavalette. “It started really well, and then kind of went down because he learned that he could take advantage of some stuff that I couldn’t do. But ever since we went to Europe in April to do two competitions there, and what we experienced there, we’ve built back up to the partnership. Clearly today, it showed, and it’s been a really good month of training hard. He did his job, and I couldn’t be more proud of him.”

De Lavalette also brought her 2020 Tokyo Paralympics horse, Clarc, to Tryon. She says her two top geldings have some similarities, but are also unique.

“Sensei is a little different in the sense that he’s more active,” she said. “He’s still a little lazy like Clarc. That’s my type of horse, apparently! But he’s got a bigger essence. I’ve learned so much from him that I can use with Clarc, and it’s made a huge difference in both of the horses.

“I’m so proud of [Sensei],” de Lavalette continued. This is only the second time we’ve done this freestyle. We put the music and the choreography together, did it in Europe, and it went well. So today was definitely a highlight. I’m so proud of both of the boys. They were just great.”

Kate Shoemaker (Wellington, Fla.) finished in second place in the CPEDI3* with Solitaer 40, the 2007 Hanoverian gelding she co-owns with her parents, Craig and Deena Shoemaker. Shoemaker and ‘Soli’ have literally been around the world together, with a competition record that includes representing the U.S. at the FEI World Equestrian Games in 2018 and the 2020 Tokyo Paralympics.

“He’s my boy that I can trust. Whatever the circumstances are, he’ll go in there and he’ll get it done,” said Shoemaker. “What I liked about this weekend is each day, he was able to get a little bit better. He’s a trier. I just love him.”

For Shoemaker and Soli, this competition at the TIEC was a homecoming of sorts. After strong showings in the FEI Grade IV Team and Individual Tests, they concluded their competition by performing a meaningful freestyle to music from the Jurassic Park soundtrack, scoring a 75.683%.

“This weekend was kind of full circle for us because we rode our WEG 2018 Tryon freestyle for only the second time since WEG,” said Shoemaker. “As he was doing the test you could tell he was just like, ‘This is my song!’ That was a really special moment for us, to be in the arena and bring that full circle here this weekend.”

This CPEDI3* serves as the final observation event ahead of team selection for the 2022 FEI Para Dressage World Championship, which will take place in August in Herning, Denmark. The team members will be selected in July. USEF Para Dressage Chef d’Equipe Michel Assouline is optimistic about the pool of American athletes heading into this championship.

“We have some decent scores and a lot of consistency,” said Assouline. “We have three riders with two horses, which is another luxury. In the past, we didn’t have that scenario where some riders had a backup horse, but we’ve got at least three now.”

This weekend’s competition was an important one in preparation for Herning, Assouline said, and will help the athletes as they train over the coming weeks.

“Judges know we are moving towards the world championship, so they tend to be very specific [with their feedback] which will help the riders,” said Assouline. “They will all go home with a good plan in mind. I’m very happy because we’ve got at least four or five solid combinations with the world championship in mind.

“I’m absolutely grateful for us being in this fantastic facility,” Assouline said of the TIEC. “It’s a good stage here. There’s a lot happening—some signs and flags and music. You need to test your horses in that environment. This is really made possible by Perrigo, which has been an amazing backer for us, which gives us more opportunity to present our horses on that sort of stage.”