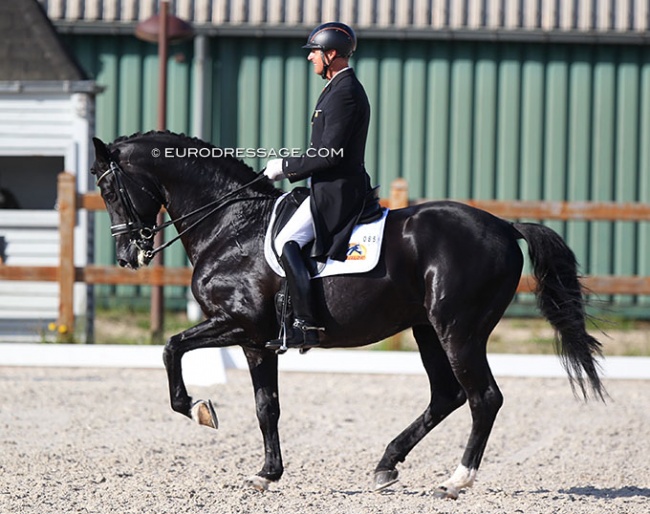 Chinook was originally named Cowboy and is by Vivaldi out of Sarita (by Havidoff x Ferro). He is bred by the Andeweg family. He is a full brother to Dutch team horse Desperado (Emmelie Scholtens).

The black was first licensed by the Westfalian breeding society in 2010.

Under Emmelie Scholtens and owned by Ad Valk, he won the 2010 VWF Dressage Cup finals for 3-year olds and finished second at the 2011 Pavo Cup Finals. This made him eligible to do the 2011 autumn KWPN Stallion Performance Testing for KWPN approval, but he did not pass the testing.

In August 2011 the stallion sold to Jose Kruiniger of R.P.A. Kruiniger Holding. The horse was moved from Scholtens' stable in training with Jessica Buying who produced the horse up to ZZ-Zwaar (M/S) level l in 2016.

In 2016 Kruiniger moved the stallion to Patrick van der Meer's yard where he remained for the rest of his sport career.  The duo made its international show debut in December 2016 at small tour level at the CDI Mechelen and stayed at small tour for the 2017 season, when he showed at CDi's in Joosland, Hagen, Compiegne and Aachen.

He made his international Grand Prix debut at the CDIO Compiegne in May 2018 and scored 60.891%. He only returned to the CDI ring nine months later at the 2019 CDI Le Mans, where he produced a 69.413% Grand Prix score. Van der Meer and Chinook rode Joosland, Geesteren, Falsterbo, Ermelo, Herning and Frankfurt that year and did not show internationally in 2020.

Their last competition year was 2021 with starts in Mannheim, Grote-Brogel, Compiegne, Waregem, and Exloo. His Grand Prix score at the latter show, his last was 70.500%.

Van der  Meer announced Chinook's retirement from sport on Facebook. The stallion will move to Carolyn Kooiman's yard where he will stand in the field.

"So many nice memories. Super that you can relax now. I'm grateful to José Kruiniger for the trust and the nice time. Now he can enjoy the field," Van der Meer stated.