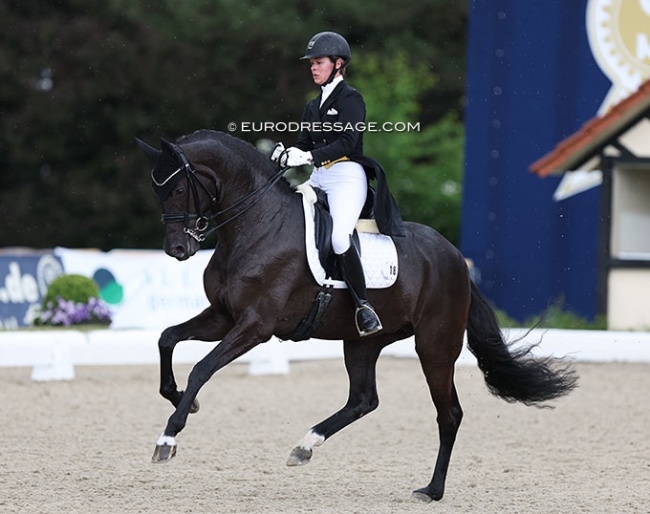 Kira Wulferding has lost the ride on her first and only international Grand Prix horse, Soiree d'Amour. St. Georg reported that the mare has moved in training with German squad rider Carina Scholz.

Soiree d'Amour is a 13-year old Oldenburg mare by San Amour out of Lara Croft (by Latimer). She is bred by Maren Bergen.

Wulferding received the ride on the gorgeous black mare when she was a 3-year old and in her barn she sold to current owner Birgit Kalvelage.

Under the supervision of Wolfram Wittig, Wulferding trained the mare up to Grand Prix level. They were 7th in the 2017 Nurenberger Burgpokal Finals for developing Prix St Georges horses and they first national Grand Prix start followed in 2019 and finished 11th in the Louisdor Cup final that year.

The horse's as well as the rider's international Grand Prix debut followed at the CDI Verden in May 2021, followed by a start in Herzlake. In 2022 they rode in two CDI's, in Opglabbeek and the Aachen Dressage Days in Hagen.

After the CDI in Hagen, Soiree d'Amour was moved to Carina Scholz' yard near Warendorf.

Carina's husband Fabian Scholz confirmed to St. Georg that owner Kalvelage approached Scholz for training. "Kira trained the mare exemplary. Carina is now getting to know the mare. A show start will only happen when she is ready. The horse was with the same rider for ten years, it just takes time."