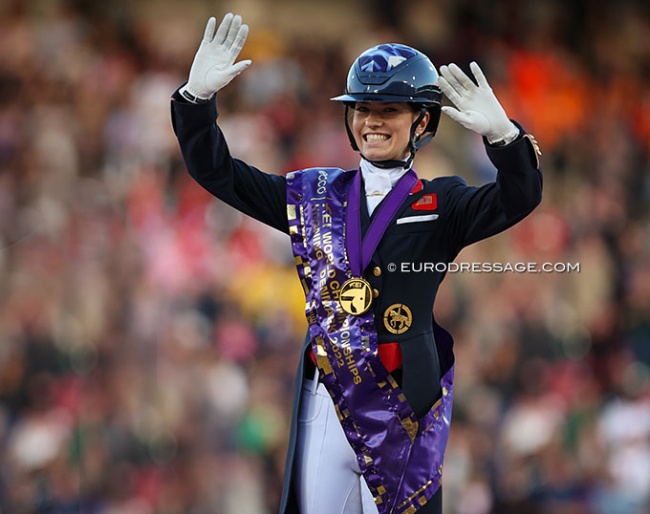 On a night when the final four riders brought something very special to the ring it was host-nation superstar Cathrine Dufour who claimed silver medal spot ahead The Netherlands’ Dinja van Liere and Hermes.

Van Liere, who turns 32 next week, has a formidable record of success at the World Young Horse Dressage Championships, and in 2018 she steered Hermes into bronze medal spot in the Six-Year-Old category. Move on four years and the pair have achieved a very great deal, peaking with a clean sweep of victories at the CDIO5* on home ground in Rotterdam six weeks ago.

Yesterday they helped clinch an Olympic qualifying spot for their country when the Dutch finished fifth in the Blue Hors FEI Dressage Team World Championship, and in today’s Grand Prix Special they posted a new leading score of 79.407 when fourth-last to go. It wasn’t what she had been hoping for - “I really wanted over 80%” she admitted at tonight’s post-competition press conference, but it was enough to pressure the final few in the closing stages and stake that place on the podium.

“He was a bit impressed by the arena on Saturday and again today, but we had a job to do and we wanted to do a nice test without big mistakes so I was happy I could do that. He spooked twice a little bit but quickly focused again and went on. He’s still so young and so talented!”, she said of her 10-year-old stallion.

Character-wise apparently Hermes is “really smart but he’s also a clown and thinks everything is so funny. He’s really enthusiastic which makes him fun to ride and he loves all the attention. You can see it when we do the salute at the end of a test, he has a really big ego and next to that he has so much talent for all the collected work and piaffe and passage so I’m really happy to have a horse like him”, the Dutch rider said.

We Tried to Go For It

Cathrine Laudrup-Dufour and Vamos Amigos settled the fate of team gold in Denmark’s favour yesterday and the crowd in the Stutteri Ask Stadium were with them every step of the way again in today’s Grand Prix Special. In a delightful test they earned a mark of nine for a transition before making a costly mistake in the two-tempis they still put them out in front with the first over-80-percent score when putting 81.322 on the board.

“I’m really pleased with Vamos, he felt a lot better than yesterday. I felt the connection improved a lot. Of course there was that bit in the two-tempis, that’s just sport and we tried to go for it - and the crowd were fantastic!”, she said.

That crowd were still screaming when Fry came into the ring with just two left to go. “They were literally going wild and he (Glamourdale) could feel the atmosphere and rose to it today. He was trying so hard and he gave me the most incredible feeling throughout the test!”, the British rider said.

Yesterday she admitted that she was concerned that their lack of expertise in the pirouettes would let herself and her horse down today. But in the end they nailed them.

"Anne van Olst, my trainer, was up the entire night worrying how I was going to fix those pirouettes, and I got a great tip from Isabell as well. And with the combination of both of them we got it done today," said Lottie Fry (GBR), having posted what would be the winning score of 82.508.

It wasn’t decided however until the final partnership of Isabell Werth and Quantaz came into the ring as the last pair to go. And the German ace and defending Grand Prix Special World champion made quite an entrance.

As she passed the departing Fry on her way into the ring she gave her British rival a congratulatory high-five before re-establishing the most dramatic passage in preparation for going down the centreline. It was a wonderful sporting gesture.

“Isabell is literally the queen!”, Fry said of the Dressage superstar who slotted into fourth place, just off the podium, with a score of 79.073. “She is amazing, she has inspired me since I was five years old so it’s incredible and she’s the nicest person, always cheering and supporting!”.

Talking about Glamourdale, Fry said she was blown away the first time she rode him as a six-year-old. “I’d never sat on anything like him before. He’s always been so special and the feeling he gives now is the same as when he was six - the sky is the limit!

“When he was seven he won the World Championship for Young Horses and that was when we knew he was a massive showman, he loves going in the ring, the more people the better, he wants to show off, he just wants everyone’s eyes on him! And then we made the step to Grand Prix and he just keeps getting better and better and stronger. He’s one in a million, I’ll never find one like him again. The future is also so exciting, this is his first senior championship and I feel like there is so much we can improve that it’s scary!”, Fry said.

Now it’s on to the last collection of medals in Wednesday’s Grand Prix Freestyle. Fry says she has something very special under her belt with her floorplan and musical score.

“The theme is Best of Britain, it’s all British tracks and it really suits Glamourdale. When you turn it on he just can’t stop dancing to it!”