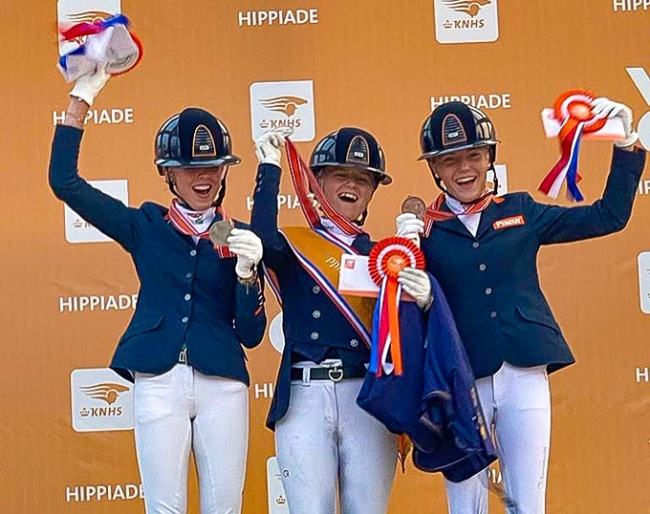 Maddy Dijkshoorn and Boogie de l'Aube became the winners of the 2022 Dutch FEI Pony Championships held during the "Hippiade" at the KNHS headquarters in Ermelo on 16 August 2022.

Two groups of combinations (17 and 20 pairs) competed in the warm-up round and the 10 best scoring pairs moved on to the Kur to Music finals which decided the medals.

After having won tea and Kur silver at the 2022 European Pony Championships in Poland at the beginning of August, Dijkshoorn now added the national title to her string of achievements. It was a close fought battle with her team mates Morgan Walraven and Esmee Boers, but in the end Maddy and her 15-year old Boogie de l'Aube (by FS Don Worry x Varello)  prevailed and got the champion sash. After placing second in the warm-up round in her group behind Morgan Walraven, the duo scored a winning 76.558% in the freestyle.

"The Dutch championships are very special. The Europeans were great and Boogie never went better than there, but we were able to hold onto that form and winning here is the icing on the cake," said Dijkshoorn. "The whole competition went very well. In the first test in the morning I had no mistakes and the kur went fluently and easy. I had hoped for a top three spot but didn't expect to become champion."

Dijkshoorn is trained by Marlies van Baalen. The chestnut pony made his international show debut under the Belgian based Danish rider Emilie Thornby Ffinch and then sold to Austrian Felicita Simoncic before coming to The Netherlands.

"The next month he can take it easy and then we'll pick up training again for a few international shows later this year," said Maddy.