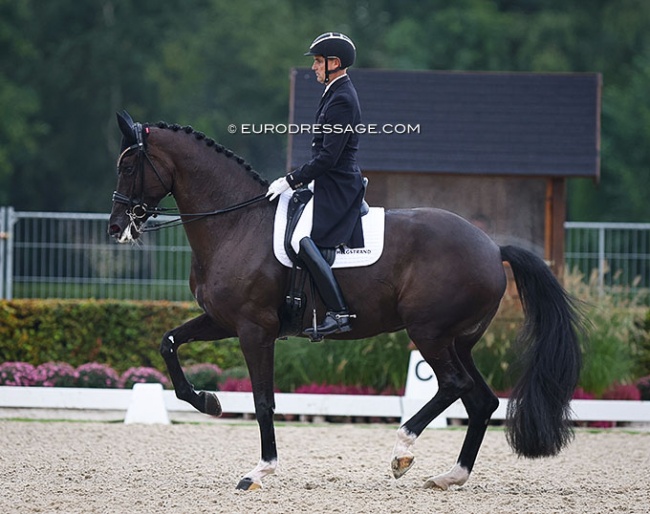 The programme of the 2022 World Championships for young dressage horses in Ermelo on 7 - 11 September 2022 was packed with young classes for ages 4 to 7, as well as a CDI 3* Grand Prix tour.

The Grand Prix took place early on Saturday morning with rain dampening the spirits. The riders remained unphazed and did their best and Charlotte Fry confirmed that 2022 is her year. After winning the World Championships in Herning on Glamourdale, she also won the World Young Horse Championships with 7-year old Kjento. In addition she bagged two further victories in the big tour on Everdale (by Lord Leatherdale x Negro). She won the Grand Prix with 76.130% and the freestyle with 84.335%.

Andreas Helgstrand brought his second Grand Prix, Queenparks Wendy (by Sezuan x Blue Hors Soprano) along. This WCYH alumni is now 8 years old and has her first season at Grand Prix level down her belt. She was second in the Grand Prix with 73.043% and won the Special with 75.638 %

German Dorothee Schneider missed out on the World Championships in Herning, but kept on chiselling her youngsters and competed non stop at national events through the summer. Her WCYH alumni Sister Act von Rosencarree, Sissy Max-Theurer's 10-year old Oldenburg mare by Sandro Hit x Royal Diamond, was fifth in the Grand Prix (71.239 %) and finished second in the Special (72.085 %)

See a selection of photos from the Grand Prix as well as scene photos we haven't featured yet in our coverage from two weeks ago.

Eurodressage photographed (almost) all riders competing at the 2022 World YH Championships. If you are want to use our photos for social media or prints, email us first.