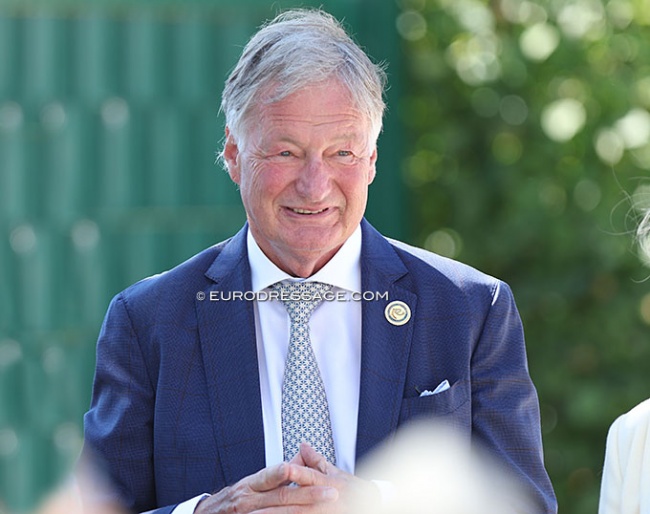 After 29 years Aachen’s most famous Dutchman is saying “Goodbye." Friday 30 September 2022 is Frank Kemperman’s last day at work as the Chairman of the Aachen-Laurensberger Rennverein and Show Director of the CHIO Aachen.

Started as a Groom

Frank Kemperman started off as a groom, among others looking after the elegant steeds in the stables of Aachen. He was already attracted to horses as a child – albeit against his parent’s wishes. His father would have preferred to see him on the football pitch. However, young Frank asserted himself and continued along his own path.

Later he worked in the press offices at equestrian sport events, was manager of a football club, co-organised Olympic Games in executive positions. So one can really say he learnt his trade from scratch. He has extensive expertise, not just in terms of the sport. He is also very well-informed when it comes down to technical issues, fibre optics and double oxer – Kemperman knows everything there is to know about both.

Born in a small village near Nijmeghen, Kemperman falls back on a huge network of international contacts. However his most important characteristic is perhaps the fact that he doesn’t take life or above all himself too seriously. Questioned a few days ago as to what is most important on the new board’s list of things to learn, Frank Kemperman gave a typical “Kempi” answer: “Well, they are Germans – so they can’t ride a bike anywhere near as good as me.”

Kemperman’s credo is that it is always helpful in life to have a sense of humour.

“Tot ziens en welkom!” - Goodby and welcome!, the ALRV President, Stefanie Peters, calls over to the outgoing Chairman in his native language. Because instead of holding the position of Chairman, Frank Kemperman will in future be a member of the Supervisory Board.

“We are not going to let him escape completely, we don’t want to have to do without his experience and expertise,” explained Peters. Occupying the position of Vice-President, Kemperman will be her representative on the board. In particular, the current project involving the expansion of the grounds including the urgently necessary construction of the new indoor hall carries his signature. “We aim to carry out this project together,” stated Peters.

Kemperman is familiar with large-scale building measures. The showgrounds at the Aachen Soers were modernised in the run-up to the FEI World Equestrian Games in 2006. And of course when questioned about his personal highlight in almost three decades it is precisely these World Championships in Aachen in 2006 he mentioned.

That enthusiasm, the atmosphere, the totally euphoric crowds, who turned that world championship event into an incredible festival had simply been unique. Over those days in the summer of 2006, Frank Kemperman reported, the team in Aachen had added an exceptional chapter to the history of the equestrian sport.

Frank Kemperman has co-written many chapters over the past decades. The expansion of the showgrounds, the digital transformation, the transition of the tournament from an equestrian show into an international event, all of these aspects predominantly also carry Kemperman’s signature. He remembers that all-decisive call very well.

He was “somewhere in the Ardennes” when the President of the ALRV at the time, Kurt Capellmann, rang him and offered him the job at the famous Aachen-Laurensberger Rennverein. “First of all, I was rather astonished that the Germans wanted a Dutchman as their Chairman,” he grinned, but then he accepted with total conviction and took over the job in September 1993.

When Frank Kemperman looks to the right while sat at his desk, he can see the final warm-up arena of the show-jumpers. From here Ludger Beerbaum and co. ride into the legendary Main Stadium of Aachen. If he looks straight ahead – during the CHIO – he can see the coffee bar, which is particularly popular among the athletes. As close as possible to the sport, in the midst of it all, always an open ear for the participants and especially for the grooms too – that was and still is extremely important to him. As is promoting the youth, a commitment that the CHIO Aachen has constantly extended and pushed over the past years. “As a young grandad I find that twice as good,” stated Kemperman.

“Frank has shaped an era,” said Michael Mronz, General Manager of the Aachener Reitturnier GmbH, adding that it had always been a trusting and inspiring working relationship. “That is why I am particularly looking forward to continuing this collaboration with Frank Kemperman in his capacity as a member of the Supervisory Board,” commented Mronz. And his new job as “Grandpa Frank” is almost even nicer,” grinned Mronz.

“Kempi” isn’t melancholic, when he reflects back on the past. More full of joy at having achieved so much for the CHIO and the sport. And at the fact that he will now have more time for the family, particularly his granddaughter, Florentine. “I had a great time here at the CHIO,” he said. Now it is time to completely hand over the responsibility to the new board comprising of Birgit Rosenberg and Philip Erbers.

Even if “it is not easy to say goodbye,” remarked Kemperman. Perhaps he will try his hand at gardening, at least that is his wife’s idea, even if according to own accounts he can’t even tell the difference between flowers and weeds. He feels a strong identification with the CHIO and ALRV: “When I said “we” up until now, I meant the CHIO. That always got me into trouble with my wife.“

At least that might improve in future, because he has no high hopes as far as the gardening is concerned.