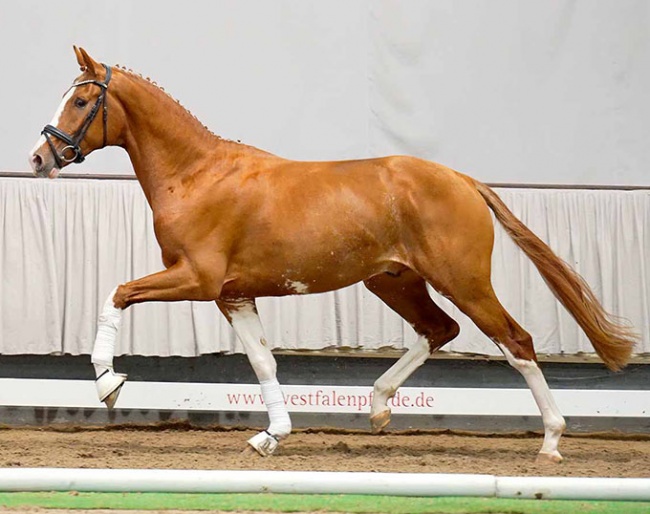 The 2.5 year old colt Zaraphino became the top selling lot in the 2022 Westfalian Online Colt and Broadmare auction for which the online bidding concluded on 14 November 2022.

Twenty-seven youngsters and four broodmares were offered for sale.

The chestnut colt Zaraphino (by Zoom x Florestan) sold to a German buyer for 40,000 euro. He is bred and was presented by Christine Rethemeyer,

The second most expensive horse was Vanderbilt (by Vaderland x Fidertanz), bred by Gerd Pigge and presented by Katja Bodenkamp. He sold for 29,000 euro to Holland.

Vernissage (by Vaderland x San Amour) fetched 24,500 euro and Jetset (by Jovian x Sir Donnerhall) sold for 22,000 and will remain in Germany.

Three quarters of the youngsters on offer found a new owner this evening. Ten of these will start their dressage careers in seven different countries outside of Germany. On average, the international clientele invested 15,363 euro for a 2.5 year old colt.

An Austrian paid 15,000 euro for Von Herzen (by Valverde x Furst Grandios), while Ice Ice Baby (by Ibiza x Rousseau) moves to Cadiac Dressage in Sweden for 14,500 euro. He is joined in Sweden by Fairhope R (by For Romance x Foundation) for 13,500 euro and by Bonifacio (by Bonds x Christ) for 13,500 euro. A Dane bought Lorenzo (by Lord Europe x Don Romantic) for 13,000 euro. Feel Good (by Franziskus x Cornet Fever) moves to Hungary for 10,000 euro.

The most popular broodmare was Soraya (by Sir Heinrich x Jazz Rubin). She is in foal to Vision and sold to Great Britain for 14,500 euro. This mare had already sold as a foal to his current owner, Alojz Novak, Slovenia, in 2017.

All four broodmares on offer changed hands for an average price of 8,688 euro.