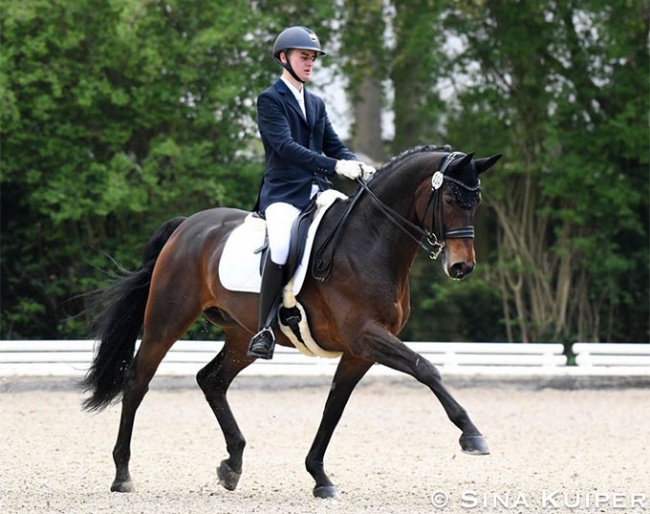 German squad listed young rider Paul Löcher has parted ways with his trainer Katrin Burger as he begins a new chapter as a college student combined with dressage riding.

The Maxdorf based Löcher is one of Germany's young rising stars. The German young riders squad for 2023 has only five riders in the A-squad and six in the B-squad. Paul and Amaro T are members of the B-squad.

The 19-year old Paul made his international show debut as a junior rider in 2021. After finishing 13th with Limoncelli (by Lord Loxley x Graphitano) in the Preis der Besten, he debuted at his first international at the CDI Kronberg in June 2021.

In 2022 he rode Amaro T, an 11-year old Westfalian by Ampere x Fidermark, at the CDI's in Kronberg and Neu-Anspach. At the 2022 German Young Riders Championships they were 10th.

Löcher will begin his studies to for a professional future in real estate and the commute to his coach, Katrin Burger in Bretten, from his own yard in Maxdorf has become too time consuming.

"After graduating from high school, I decided to also focus on my professional career in addition to my sporting career at the beginning of 2023, because I would like to take over my parents‘ real estate company later," Paul told Eurodressage. "For this reason I will start my studies in a few weeks. The resulting time commitment and the additional physical distance would unfortunately make further cooperation impossible."

Paul started working with Burger and her husband Achim Neubert at the end of 2020. He became regional champion and went on to book his first national successes as well as got some international mileage.

"They have contributed a large part to my success. We continue to be connected through many great memories and happy moments," he said.

Pieces of the Puzzle

Paul is now re-laying the pieces of the puzzle for his riding career combined with studies. In the meantime he has been getting help from his home team and Australian Hayley Bereford.

"During my studies, I will complete many practical modules and be accommodated by many well-known companies throughout Germany," he explained. "Hayley is currently supporting me both in the training of my young horses and in my riding. Furthermore, my sister and our team give me the best possible support when working with the other horses, so that I can continue to concentrate very well on Amaro, my national team horse, and Fraser Island, my young horse."

As of 1 February 2023, Burger and Neubert welcome Jerome Schaack as their new assistant trainer to their team. The Luxembourg born Schaack, who worked before for Christoph Niemann, will join Nina Dirks on the riders' team.